Showing posts with the label Providence
Show All

Fear, Foreboding, and Getting a Grip About Technology 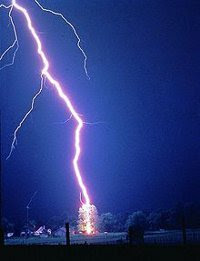 Maybe some folks still have religious scruples about 'defying God' with lightning rods: but I haven't run into any, and I'm certainly not one of them. My house has a lightning rod , installed by a previous owner. I made sure it's in good working order, since our chimney is one of the taller structures in the neighborhood. Ben Franklin and Prokop Diviš 's invention is on most tallish structures in my part of the world. Lightning rods have apparently joined movable type and the moldboard plow as technology that 'we've always had.' Even the Internet seems to be gaining grudging acceptance: although I regularly encounter folks who don't seem at all comfortable about social media: and express their grave misgivings in online posts. My guess is that every generation has included a few with profound misgivings about newfangled technology: or change of any sort, and that's almost another topic. I grew up in a world of AM radio and dial te
Post a comment
Read more

'But at your word . . .' Sunday Reflections, 5th Sunday in Ordinary Time Year C Miraculous Draught of Fishes ,  Raphael , 1515 [ Web Gallery of Art ] Readings   (New American Bible: Philippines, USA) Readings   (Jerusalem Bible: Australia, England & Wales, India [optional], Ireland, New Zealand, Pakistan, Scotland, South Africa)  Gospel  Luke 5:1-11   (Revised Standard Version – Catholic Edition) While the people pressed upon him to hear the word of God, he was standing by the lake of Gennesaret. And he saw two boats by the lake; but the fishermen had gone out of them and were washing their nets. Getting into one of the boats, which was Simon's, he asked him to put out a little from the land. And he sat down and taught the people from the boat. And when he had ceased speaking, he said to Simon, "Put out into the deep and let down your nets for a catch." And Simon answered, "Master, we toiled all night and took nothing! But at your word I will let down the nets." And when they had done this, they enclosed a great sho
Post a comment
Read more
More posts