Showing posts with the label Female Saints
Show All

My traveling companions for the Lenten journey

I decided this Lent that I would not travel alone. I asked St. Bernadette, the visionary of Our Lady of Lourdes, if she would accompany me.


In the course of our walk together I am rediscovering someone I had long forgotten but who has not forgotten me.
A classic movie It began on the feast of Our Lady of Lourdes with a suggestion from a friend to watch “The Song of Bernadette,” a critically-acclaimed 1943 movie based on the book by Franz Werfel. It was available on YouTube so I could watch it at my leisure. The movie is long so I viewed it on my tablet over the course of three nights.
Unexpected emotions That was a good decision. I did not expect to be so moved by the film and was glad I could cry in private. Each time "The Lady" appeared to Bernadette, the tears would flow. I did not know why. Was it the beautiful music? Was it the way Bernadette (played by Oscar winner Jennifer Jones) looked at "The Lady" with such love? 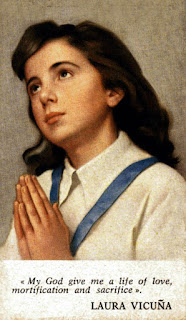 Here is the patience and the faith of the saints. ~Apocalypse 13:10
My Peace I Give You by Dawn Eden is a much-needed spiritual resource for those recovering from any type of physical or emotional suffering brought on by the lust, crassness or cruelty of others. It took a long time to read because I had to stop and take time to ponder and absorb, reading several parts of it over again. Not only is Dawn's book well-written but every contention is backed up by solid references. With modesty and restraint, she confronts a topic uncomfortable to many. The misuse of the gift of life-giving sexuality has scourged multiple lives and institutions, not the least of which is our Holy Catholic Church. Too often amid the scandals, the wounded do not receive the treatment which they need in order to heal. This book, coming from the long and painful recovery of a survivor of abuse, will be a grace for many who are hurting from similar wounds. Hopefully, it will inspire all who read it to take ac…
Post a Comment
Read more

A Saint for a Rainy Day

Reposted from Costing Not Less Than Everything

The patron saint of excessive rain is Saint Genevieve.  As a young girl, she was singled out by Saint Germain of Auxerre for her sanctity and she averted the sack of Paris by Attila the Hun through prayer and fasting. Acting as an intermediary between the city and Childeric I when he conquered Paris, she ensured the supply of grain to the inhabitants and persuaded him to release prisoners of war.  She was responsible for the conversion of Clovis I, Childeric’s successor. After her death, she worked many miracles; in her life, she was noted for her piety and asceticism.


The Pantheon in Paris was originally designed to be a fitting resting place for the saint – but her relics were publicly burnt in 1793. To this day she is invoked as the patron saint of Paris, against fever and against flood, drought and disaster.
Post a Comment
Read more
More posts