Showing posts with the label Giovanni Segantini
Show All 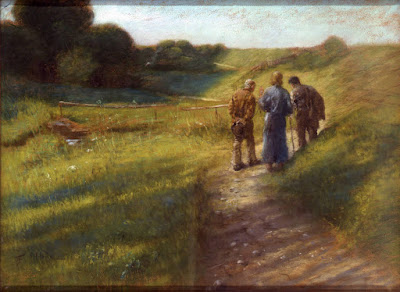 The Road to Emmaus Fritz von Uhde [ Wikipedia ] The April issue of  Magnificat  features this painting on its cover. You will find Pierre-Marie Dumont's commentary on it  here . Readings   (New American Bible: Philippines, USA)         Readings   (Jerusalem Bible: Australia, England & Wales, India [optional], Ireland, New Zealand, Pakistan, Scotland, South Africa) Gospel   Luke 24:13-25 ( New Revised Standard Version, Anglicised Catholic Edition, Canada) Now on that same day two of them were going to a village called Emmaus, about seven miles from Jerusalem, and talking with each other about all these things that had happened. While they were talking and discussing, Jesus himself came near and went with them, but their eyes were kept from recognizing him. And he said to them, ‘What are you discussing with each other while you walk along?’ They stood still, looking sad.   Then one of them, whose name was Cleopas, answered him, ‘Are you the only
Post a comment
Read more
More posts