Showing posts with the label Pope Francis's to USA
Show All

The Trip to America, According to Pope Francis 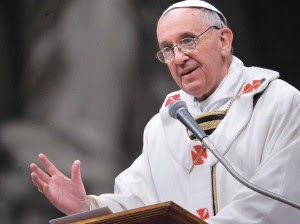 Pope Francis’s Wednesday General Audience on September 30 focused on his apostolic visit to Cuba and the United States. It was refreshing to hear the pope’s personal reflections on his visit, rather than the opinions of the media. By defining the family unit as the economic measure of society, the pope is espousing traditional Catholic social doctrine. Subsidiarity is one of the core principles which states that human affairs are best handled at the lowest possible level, closest to the people who are involved. Pope Francis also warned against the danger of individualized consumerism, the hedonistic tendency for self-gratification, which creates a “throw-away culture.” The danger is that people will put careers or self-realization before marriage and starting a family. This trend will distort the needs of natural families and represents an “ideological colonization” which will disfavor most human families, especially the poor. read more
Post a comment
Read more
More posts