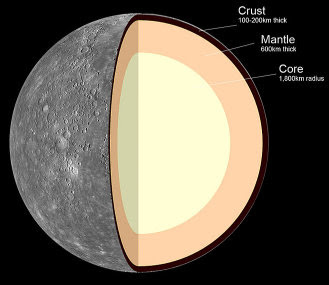 A bit shy of eight decades ago, a pilot and navigator set off on a round-the-world flight that should have provided ample material for her next book. Instead, shortly after midnight, July 2, 1937 GMT, the modified Lockheed Model 10 Electra disappeared.

She's still famous — and now has an invisible Lunar crater named after her. Eventually, Fred Noonan may have some rock named after him, or maybe not. In a perfect world, folks in the support crew would get a tad more recognition — my opinion — but this isn't a perfect world.

What's remarkable about Earhart Crater is that it's big, on the side of Earth's moon facing our planet — and buried under billions of years' of accumulated debris. Scientists found it while sifting through gravitational data.

Other scientists found that lava tubes would be strong and safe enough to house a Lunar base, and Messenger took pictures of ice on Mercury.

More at A Catholic Citizen in America.
in the news science solar planets