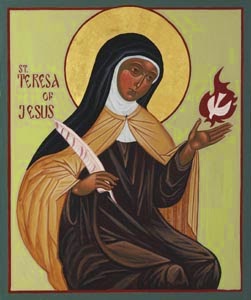 This March is the 500th anniversary of the birth of Saint Teresa of Ávila, Carmelite nun and Doctor of the Church. One of her legacies to the Church is her teaching about prayer.
In Teresa’s final book, The Interior Castle, written near the end of her life, she summarized her life of prayer. In it she imagined that her growth in love of God had been a journey from the outskirts of a crystal castle to its center, inhabited by her King. The castle image with its many rooms symbolized her soul. The King was God who beckoned Teresa to come to him and to be spiritually united with him.
Responding to her King’s call meant that Teresa first had to leave the dark, cold, noisy place outside the castle, where she spent so much time. Steadfast prayer was the key to unlock the castle door. Once inside she prayed faithfully. Quietly and persistently Teresa traveled through the castle’s rooms, each representing a stage of growth in her personal relationship with God.
Read the rest at From the Pulpit of My Life.
Carmelite spirituality Prayer Saint Teresa of Ávila the interior life