Then he told this parable: “A man had a fig tree planted in his vineyard; and he came looking for fruit on it and found none. So he said to the gardener, ‘See here! For three years I have come looking for fruit on this fig tree, and still I find none. Cut it down! Why should it be wasting the soil?’ He replied, ‘Sir, let it alone for one more year, until I dig around it and put manure on it. If it bears fruit next year, well and good; but if not, you can cut it down.’” 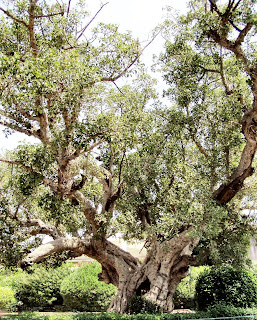 The parable in today's gospel reminds me of an incident on Thursday of Easter Week 1970 in Mount Vernon, Kentucky. I had driven the 800 or so kms from New York on Wednesday of Holy Week with a group of students from Manhattanville College, Purchase, New York, where I was studying music at the time. My car was an old Nash Rambler that I had bought for one dollar from Irish friends, Doug and Maeve Devlin, the previous year when they moved back to Dublin. The car was more than 15 years on the road and the doors didn't lock. But it had a great engine.