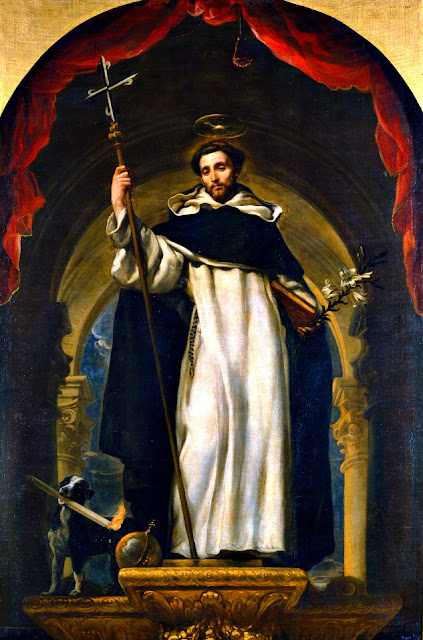 August 8 is a special day for me because not only is it my birthday, but it is also the feast day of one of my favorite saints -- St. Dominic, a Castilian priest and founder of the Dominican Order. In addition, the founder of my Oblate community, Fr. Marie-Dominique Philippe, is a Dominican. This is a special feast day for the Community of St. John.


St. Dominic was a remarkable man – a bold and brilliant priest who is the patron saint of astronomers and scientists. As the saint who preached the mysteries of the Holy Rosary, he converted the Albigensians and set the world on fire with the Truth of the Gospel message.

Dominic Guzman was born in Castile (Spain) in 1170 to affluent aristocrats, Blessed Joan of Aza and Felix Guzman. When she was pregnant, Joan had three dreams. First, she dreamed that she would give birth to a son who would be a brilliant light to the Church.  Second, she dreamed that she gave birth to a dog and that it broke away from her, carrying in its mouth a burning torch by which it set fire to the world. A dog with a torch in its mouth later became a symbol for the order which Dominic founded, the Order of Preachers, also known as the Dominicans. Shortly before Dominic’s baptism, Joan had a third prophetic dream. On her baby's forehead appeared a bright star that illumined the world.