'Truly I tell you, today you will be with me in Paradise.' Sunday Reflections, Christ the King, Year C 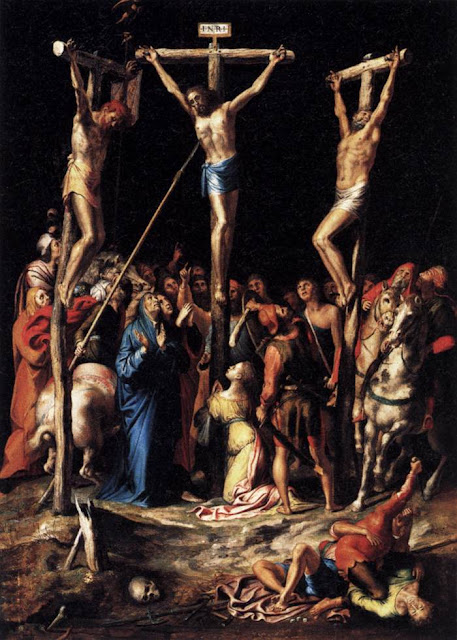 Crucifixion, Pedro de Campaña, c.1550
Musée du Louvre, Paris [Web Gallery of Art]
Gospel Luke 23:35-43 (NRSV,Catholic Ed)
The people stood by, watching; but the leaders scoffed at Jesus, saying, ‘He saved others; let him save himself if he is the Messiah of God, his chosen one!’  The soldiers also mocked him, coming up and offering him sour wine, and saying, ‘If you are the King of the Jews, save yourself!’ There was also an inscription over him, ‘This is the King of the Jews.’
One of the criminals who were hanged there kept deriding him and saying, ‘Are you not the Messiah? Save yourself and us!’ But the other rebuked him, saying, ‘Do you not fear God, since you are under the same sentence of condemnation? And we indeed have been condemned justly, for we are getting what we deserve for our deeds, but this man has done nothing wrong.’ Then he said, ‘Jesus, remember me when you come into your kingdom.’ He replied, ‘Truly I tell you, today you will be with me in Paradise.’
Jesus, remember me, when you come into your kingdom Taizé chant
About six years ago Dominican friar in Dublin told me about one of his confreres who was to celebrate Mass one morning in a nearby Sisters' convent. Since it was only a short walk he decided to wear his habit. (It was the Dominican habit that first caught my imagination about the priesthood when I was six or seven, though later on I never considered joining the Dominicans.) Along the way the friar met a Sister from another convent who chided him for being so 'old-fashioned' or 'pre-Vatican 2' or words to that effect. A little further on a young man stopped him. This was the conversation that followed: