To ask for a drink is no big request but to ask it of me?' Sunday Reflections, Third Sunday of Lent, Year A 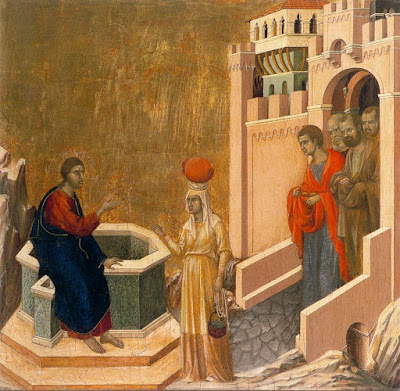 
Jesus came to a Samaritan city called Sychar, near the plot of ground that Jacob had given to his son Joseph. Jacob’s well was there, and Jesus, tired out by his journey, was sitting by the well. It was about noon.

...
The video is taken from The Gospel of John directed by Philip Saville.
I remember reading a story about Pope John Paul I when he was still known as Albino Luciani, Patriarch of Venice. One of his priests in a rural parish was known more for being absent from his parish than for being present. Cardinal Luciani went to visit the parish - and the priest was away. So the Cardinal covered for him until the priest returned some days later. The wayward parish priest got the shock of his life when his archbishop asked him to hear his confession.

Cardinal Luciani, who later became known as 'The Smiling Pope' and was with us for only 33 days in 1978 as Bishop of Rome, didn't scold the priest. He simply asked him to do for him what only a priest can do - forgive sins in God's name in the sacrament of confession.
Pope John Paul I, 26 August 1978

In the gospel Jesus asks the woman at the well directly, Give me a drink. As she was to point out to Jesus he didn't have the wherewithal to draw water himself from the well. She did.