Flee Your Road to Emmaus; Turn Your Sights on Jesus 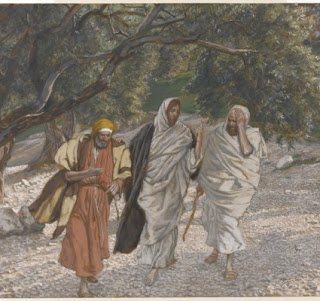 Today’s Gospel reading from Luke 24:13-35 speaks to us of Jesus’ walk with two men on the Road to Emmaus. We begin with two men departing Jerusalem, saddened in the realization that Jesus was not who they thought him to be. They were disappointed, for they thought He was their savior; yet He died. So much for being a savior! How often can we say that we are like the two men on the Road to Emmaus? Do we give up on Jesus when He does not do what we wish, or what we think is right?  These men wanted Jesus to rise to the level of King, but He died, and with that their belief in Him.

Road to Emmaus: Signs of Faith


As the men were walking, Jesus approached them. However, Jesus disguised Himself, disabling them to “see” Jesus as the Risen Lord. While walking with the men, Jesus asked them what they were discussing. The two men informed Jesus about the events of recent days: Jesus’ arrest, humiliation, crucifixion and death. They had hoped that “he would be the one to redeem Israel” (Luke 24: 21). Even with the declaration from the women who visited the tomb, that the tomb was empty and that the Lord had risen, these two men were walking away from Jerusalem, downcast; their faith shattered. How often do we see signs of faith, but choose to ignore them? Read more...
faith Road to Emmaus virtue zeal