Augustine is not an Excuse 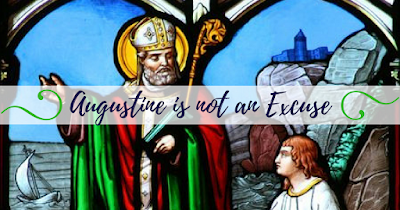 A few weeks back, the incorrigible Milo Yiannopolus posted his side of an unpublished interview with the Jesuit magazine America. (reader discretion advised, it is, after all, Milo) The general gist of it seemed to be “Yeah, I am a bad Catholic, but that’s okay. There were lots of saints that were bad Catholics.” He uses several quotes from St. Augustine’s Confessions to justify his behavior.
The interview is a fascinating read. He professes his love for his Faith, Evelyn Waugh, Aquinas… He knows his stuff! It kinda sorta in a weird way made me really proud to be Catholic. Even this guy, so full of himself and so blatantly living in contradiction to the Faith recognizes the philosophical and moral supremacy of the Catholic Church.
And yet it frustrated me so very much. Midway through, he suggests that someday, he will, like Augustine “recall his past foulness”. He is so charismatic, so intelligent, and extremely influential, but he just banks on the supposition that he can turn back to God later. After all, that’s what Augustine did. I picked up a gorgeous leather bound copy of the Confessions the other day and dove in, because I had to get this all sorted. I’m barely a third of the way through, but already I can see that Milo dearest, you and Augustine are not in the same boat at all.
Finish reading at Messy Buns & Latin Chant