From Toy Town with Love 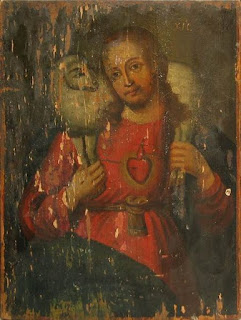 When I was a boy I used to call people by what they did. My older brothers used to laugh when I said I had seen Mr Postman, Mr Builder, Mr Plumber or Mr Dustman. I suppose  the idea came from my favourite radio program 'Toy Town'. Everybody was called by what they did. It was Mr Mayor, Mr Policeman, Mr Inventor, Mr Magician and even Mr Grouser! When the Parish priest visited and pointed to the picture of the Sacred Heart, he asked me who he was. I answered,  "Mr Loving." Once again my older brothers laughed, but the parish priest didn't laugh. He said that  I was absolutely right . However, when he asked me who had told me, I said nothing, because I knew my bothers would laugh at me again if I said it was from my favourite radio program, 'Toy Town'.
Although pictures or statues of the Sacred Heart depict Christ dressed as he might have been while he was on earth, a closer look reveals that he is actually depicted as he is now in heaven. For instance, you can see the marks on his hands made when he was crucified, the crown of thorns around his heart, which is now flaming with a love fully ignited after being reunited with his Father.
read on....