Visitor from the Stars 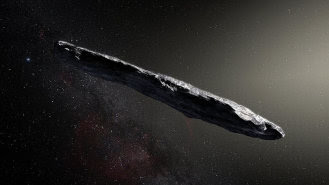 Scientists thought ‘Oumuamua was a comet when they spotted it last month.

"Follow-up observations showed it was more like an asteroid: and going too fast to be from the solar system.

"‘Oumuamua is from interstellar space. It's the first object of its kind we've seen.

"What scientists are learning about ‘Oumuamua tells us a bit about other planetary systems, and raises intriguing new questions...."