When they were approaching Jerusalem, at Bethphage and Bethany, near the Mount of Olives, he sent two of his disciples and said to them, ‘Go into the village ahead of you, and immediately as you enter it, you will find tied there a colt that has never been ridden; untie it and bring it. If anyone says to you, “Why are you doing this?” just say this, “The Lord needs it and will send it back here immediately.”’ They went away and found a colt tied near a door, outside in the street. As they were untying it, some of the bystanders said to them, ‘What are you doing, untying the colt?’ They told them what Jesus had said; and they allowed them to take it. Then they brought the colt to Jesus and threw their cloaks on it; and he sat on it. Many people spread their cloaks on the road, and others spread leafy branches that they had cut in the fields. Then those who went ahead and those who followed were shouting,

‘Hosanna! Blessed is the one who comes in the name of the Lord! Blessed is the coming kingdom of our ancestor David!
Hosanna in the highest heaven!’
or John 12:12-16 (NRSVACE)

The next day the great crowd that had come to the festival heard that Jesus was coming to Jerusalem. So they took branches of palm trees and went out to meet him, shouting,
‘Hosanna!
Blessed is the one who comes in the name of the Lord— the King of Israel!

Jesus found a young donkey and sat on it; as it is written:
‘Do not be afraid, daughter of Zion.
Look, your king is coming, sitting on a donkey’s colt!’
His disciples did not understand these things at first; but when Jesus was glorified, then they remembered that these things had been written of him and had been done to him.
At the Mass
Readings (New American Bible: Philippines, USA)
Readings (Jerusalem Bible: Australia, England & Wales, India, Ireland, New Zealand, Pakistan, Scotland, South Africa)
Gospel Mark 14:1 – 15:47 [or 15:1-49] (NRSV, Catholic Edition) 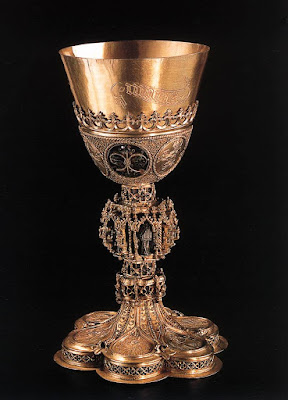 
Then he took a cup, and after giving thanks he gave it to them, and all of them drank from it. He said to them, ‘This is my blood of the covenant, which is poured out for many (Mark 14:23-24). 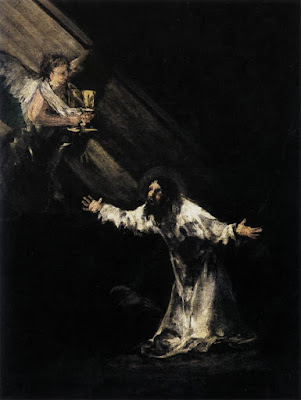 Christ on the Mount of Olives, Goya [Web Gallery of Art]

Abba, Father, for you all things are possible; remove this cup from me; yet, not what I want, but what you want (Mark 14:36).

As we enter Holy Week we can be overwhelmed by the sheer richness of the liturgy. I have always found it difficult to say anything about or during these days. American writer Flannery O'Connor in the quotation below touches on the inner suffering of some as they struggle to believe in Jesus, something she knew from personal experience. She also embraced the Cross in coming to terms with lupus, which had caused her father's early death. His death was for her when she was 15, an experience of embracing the Cross.
Continue here.
Flannery O'Connor GK Chesterton Goya Palm Sunday Pope Francis Sunday Reflections World Youth Day