'I can accomplish much if I cooperate with Christ . . .' Sunday Reflections, 17th Sunday in Ordinary Time, Year B 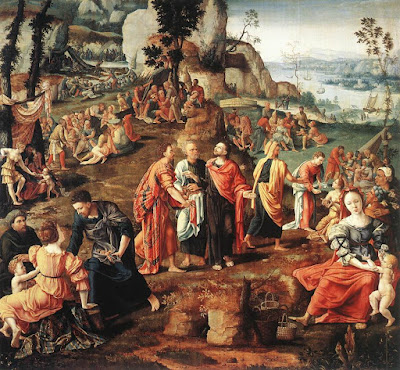 Miracle of the Loaves and Fishes, Lambert Lombard [Web Gallery of Art]

After this Jesus went to the other side of the Sea of Galilee, also called the Sea of Tiberias. A large crowd kept following him, because they saw the signs that he was doing for the sick. Jesus went up the mountain and sat down there with his disciples. Now the Passover, the festival of the Jews, was near. When he looked up and saw a large crowd coming towards him, Jesus said to Philip, ‘Where are we to buy bread for these people to eat?’ He said this to test him, for he himself knew what he was going to do. Philip answered him, ‘Six months’ wages would not buy enough bread for each of them to get a little.’ One of his disciples, Andrew, Simon Peter’s brother, said to him, ‘There is a boy here who has five barley loaves and two fish. But what are they among so many people?’ Jesus said, ‘Make the people sit down.’ Now there was a great deal of grass in the place; so they[c] sat down, about five thousand in all. Then Jesus took the loaves, and when he had given thanks, he distributed them to those who were seated; so also the fish, as much as they wanted. When they were satisfied, he told his disciples, ‘Gather up the fragments left over, so that nothing may be lost.’ So they gathered them up, and from the fragments of the five barley loaves, left by those who had eaten, they filled twelve baskets. When the people saw the sign that he had done, they began to say, ‘This is indeed the prophet who is to come into the world.’
When Jesus realized that they were about to come and take him by force to make him king, he withdrew again to the mountain by himself. 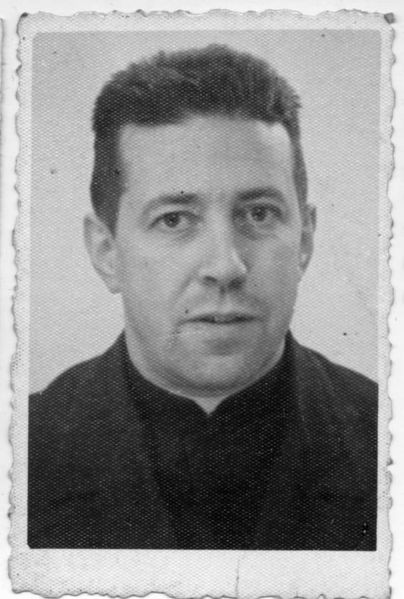 St Alberto Hurtado SJ is a man who took today's gospel very seriously, He established the first Hogar de Cristo, Home of Christ, in Chile in 1944 to care for the many in Santiago who were homeless or had little to eat. There are now many such homes, not only in Chile and in other countries in South America but in the USA. Canonised in 2005 by Pope Benedict, he is still venerated in Chile as he was loved in his lifetime by the simple title of 'Padre Hurtado'.

He can speak to us with authority, as he does in this meditation he gave many years ago. His reference to the Venerable Matt Talbot comes from the time he spent in Dublin learning English.

The Multiplication of the Loaves
Meditation during a retreat on the gift of self and cooperation.
Indecision, faintheartedness is the great obstacle in the plan of cooperation. We think: 'I’m not worth all that much', and from this comes discouragement: 'It makes no difference whether I act or fail to act. Our powers of action are so limited. Is my unpretentious work worthwhile? Does my abstaining from this have any meaning? If I fail to sacrifice myself nothing changes. No one needs me . . . A mediocre vocation?' How many vocations are lost. It is the advice of the devil that is partly true. The difficulty must be faced.
The solution
Five thousand men along with women and children have been hungry for three days . . . Food? They would need at least 200 denarii to feed them and this is the approximate yearly salary of a labourer.
In the desert! 'Tell them to go!' But Andrew, more observant says: 'There are five loaves and two fish, but what are these among so many?' Here we have our same problem: the disproportion.
And the loaves. Made of barley, hard as rocks (the Jews used wheat). And the fish. They were from the lake, small, rather mushy in texture, carried by a young boy in a sack that had lain on the ground for three days in the heat . . . not much of a solution.
Did the Lord despise this offering? No, and with his blessing he fed all the hungry and had leftovers. Neither did he despise the leftovers: twelve baskets of the surplus were gathered, fish heads and bones, but even this he valued.
The young boy consented to give Christ his poor offering, not realizing that he would feed the multitude. He believed that he had lost his small possession but he found instead that there was even a surplus and that he had cooperated for the good of the others.
And me . . . like those fish (less than those loaves) bruised and perhaps decomposing but in the hands of Christ my action may have a divine scope a divine reach.
Remember Ignatius, Augustine, Camillus de Lellis, and Matt Talbot, base sinners whose lives were converted into spiritual nourishment for millions who will continue to feed on their witness.
My actions and my desires can have a divine scope and can change the face of the earth. I will not know it, the fish did not know it either. I can do a great deal if I remain in Christ; I can accomplish much if I cooperate with Christ . . .

Deus in loco sancto suo:
God is in his holy place,
Deus, qui inhabitare facit unanimes in domo:
God who unites those who live in his house;
ipse dabit virtutem et fortitudinem plebi suae.
he himself gives might and strength to his people.

Ps 67[68]: 2. Exurgat Deus, et dissipentur inimici eius: et fugiant, qui oderunt eum, a facie eius.
God arises; his enemies are scattered, and those who hate him flee before him.
Gloria Patri, et Filio et Spiritu Sancto.
Glory to the Father and to the Son and to the Holy Spirit.

Deus in loco sancto suo:
God is in his holy place,
Deus, qui inhabitare facit unanimes in domo:
God who unites those who live in his house;
ipse dabit virtutem et fortitudinem plebi suae.
he himself gives might and strength to his people.