'We have seen his star in the East, and have come to worship him.' Sunday Reflections, The Epiphany, Years ABC 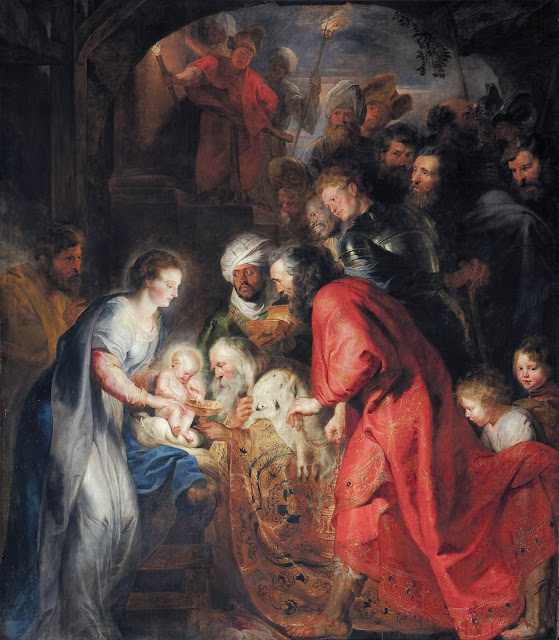 Adoration of the Magi, Rubens [Web Gallery of Art]

Now when Jesus was born in Bethlehem of Judea in the days of Herod the king, behold, wise men from the East came to Jerusalem, saying, “Where is he who has been born king of the Jews? For we have seen his star in the East, and have come to worship him.” When Herod the king heard this, he was troubled, and all Jerusalem with him; and assembling all the chief priests and scribes of the people, he inquired of them where the Christ was to be born. They told him, “In Bethlehem of Judea; for so it is written by the prophet:
‘And you, O Bethlehem, in the land of Judah,
are by no means least among the rulers of Judah;
for from you shall come a ruler
who will govern my people Israel.’”

Then Herod summoned the wise men secretly and ascertained from them what time the star appeared; and he sent them to Bethlehem, saying, “Go and search diligently for the child, and when you have found him bring me word, that I too may come and worship him.” When they had heard the king they went their way; and lo, the star which they had seen in the East went before them, till it came to rest over the place where the child was. When they saw the star, they rejoiced exceedingly with great joy; and going into the house they saw the child with Mary his mother, and they fell down and worshiped him. Then, opening their treasures, they offered him gifts, gold and frankincense and myrrh. And being warned in a dream not to return to Herod, they departed to their own country by another way.
The Epiphany is celebrated everywhere this year on 6 January as that is a Sunday. The Vigil Mass has its own antiphons and prayers but uses the readings above. 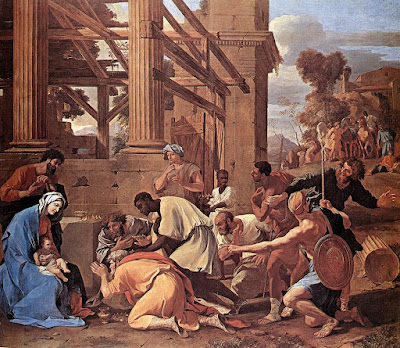 Adoration of the Magi, Nicolas Poussin [Web Gallery of Art]

I am using here the material I used last year, with some additions below the first video.

While based in Britain from 2000 till 2002 I was able to spend Christmas with my brother and his family in Dublin, a short flight from England, in 2000 and 2001. During the holiday in 2001 I saw a documentary on RTÉ, Ireland's national broadcasting service, about Filipino nurses in Ireland. These began to arrive around 1999 - 2000, initially at the invitation of the Irish government to work in government hospitals. Very quickly there was an 'invasion' of Filipino nurses and carers, now to be found in hospitals and nursing homes in every part of the country.

One of the nurses interviewed told how many Filipinos, knowing that the Irish celebrate Christmas on the 25th, unlike the Philippines where the culmination of the feast is the family meal, the noche buena, on the night of the 24th, offered to work on Christmas Day so that their Irish companions could be with their families. This also helped to dull the pain of being away from their own families.

I was moved to tears at the testimony of one nurse, from Mindanao as I recall, speaking about her job and her first Christmas in Ireland in 2000. She spoke very highly of her employers, of her working conditions and of her accommodation, which she compared with that of the Holy Family on the first Christmas night. She spoke of Jesus, Mary and Joseph in this situation as if they were members of her own family, as in a very deep sense they are, or we of their family.

Here was a young woman from the East powerfully proclaiming, without being aware of it, that the Word became flesh and lived among us. The fact that she wasn't aware of it, that she was speaking about her 'next door neighbours', made her proclamation of faith all the more powerful. She would have known many in her own place, and very likely knew from her own experience, something of what Joseph and Mary went through in Bethlehem. Her faith in the Word who became flesh and lived among us wasn't something in her head but part of her very being.
For much of the last century thousands of Catholic priests, religious Sisters and Brothers left Europe and North America to preach and live the Gospel in the nations of Africa, Asia and South America. Some of the countries and regions from which they left, eg, Belgium, the Netherlands, Ireland, Quebec, have to a great extent lost or even rejected the Catholic Christian faith. The Jewish people had, in faith, awaited the coming of the Messiah for many centuries. But when He came it was uneducated shepherds who first recognised him and later Simeon and Anna, two devout and elderly Jews who spent lengthy periods in prayer in the Temple.

Today's feast highlights wise men from the east, not 'believers' in the Jewish sense, led by God's special grace to Bethlehem to bring gifts in response to that grace, explaining, We . . . have come to pay him homage.They reveal to us that God calls people from every part of the world to do the same and to bring others with them.

Will nurses from the Philippines and from Kerala in India, migrants from Lithuania and Poland, from the east, bring the gift of faith in Jesus Christ once again to the many people in Western Europe and North America who no longer know him in any real sense? Will they by the lives they lead as working immigrants gently invite those in the West who have lost the precious gift of our Catholic Christian faith to once again come to pay him homage?

This same text is used for the Allelulia before the Gospel.

Since writing the above last year I have grown in hope that immigrants to Ireland will remind us of the precious gift of the Catholic Christian faith that our ancestors received through St Patrick in the Fifth Century. Recently, through the Praesidium of Our Lady of the Visitation  of the Legion of Mary of which I have become spiritual director in Navan, the nearby town, I have seen something of that. One Sunday a month there is adoration for families with mostly young children. A few weeks ago before we began the prayer a husband/father from Kerala, India, was instructing the young children on a particular aspect of our faith. Those he was teaching were all Irish-born, I think, with parents from different countries such as China, Australia, India and England.

On Hallowe'en the praesidium organised an All Saints' celebration in the parish hall, the children and some parents dressed as different saints, with a mixture of games, prayer and some food, mainly of the sweet variety. Families came from many towns, some as far away as an hour by car. The Franciscan Sisters of the Renewal came from Drogheda, nearly 30 kms away, all vibrant young American women living the Gospel joyfully. There were families with parents from the Philippines, China, France, India, some African countries and families with both parents from Ireland.

The Church has always seen the Epiphany as the feast that celebrates the Gospel being proclaimed ad gentes, to the nations beyond the Jewish world of Jesus himself. We in Ireland, who, through God's grace, brought the Gospel ad gentes in a remarkable way in the 20th century are now among the gentes who need to hear the Gospel again.

We Three Kings of Orient Are
sung by Celtic Woman

The conductor and, I think, arranger of this performance of the traditional Epiphany hymn is David Downes whose uncle, Columban Fr Eugene Ryan, died on Christmas Eve and was buried on 28 December. May he rest in peace.
Celtic Woman David Downes Epiphany Fr Eugene Ryan Nicolas Poussin Rubens Sunday Reflections