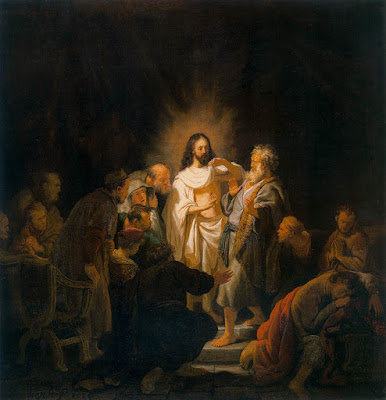 The Incredulity of St Thomas, Rembrandt [Web Gallery of Art]

When it was evening on that day, the first day of the week, and the doors of the house where the disciples had met were locked for fear of the Jews, Jesus came and stood among them and said, ‘Peace be with you.’ After he said this, he showed them his hands and his side. Then the disciples rejoiced when they saw the Lord. Jesus said to them again, ‘Peace be with you. As the Father has sent me, so I send you.’ When he had said this, he breathed on them and said to them, ‘Receive the Holy Spirit. If you forgive the sins of any, they are forgiven them; if you retain the sins of any, they are retained.’
But Thomas (who was called the Twin), one of the twelve, was not with them when Jesus came. So the other disciples told him, ‘We have seen the Lord.’ But he said to them, ‘Unless I see the mark of the nails in his hands, and put my finger in the mark of the nails and my hand in his side, I will not believe.’
A week later his disciples were again in the house, and Thomas was with them. Although the doors were shut, Jesus came and stood among them and said, ‘Peace be with you.’ Then he said to Thomas, ‘Put your finger here and see my hands. Reach out your hand and put it in my side. Do not doubt but believe.’ Thomas answered him, ‘My Lord and my God!’  Jesus said to him, ‘Have you believed because you have seen me? Blessed are those who have not seen and yet have come to believe.’
Now Jesus did many other signs in the presence of his disciples, which are not written in this book. But these are written so that you may come to believe that Jesus is the Messiah, the Son of God, and that through believing you may have life in his name.

In 2007, during a visit to Canada I was asked to give a talk to a prayer group. Afterwards, over coffee, I was chatting with on of the members, an elderly immigrant from Germany, who told me how she had become a Catholic. She had been raised as a Lutheran and had been on the verge of joining the Catholic Church for a long time but could not take the final step.

One weekday afternoon, feeling somewhat down because of this she went for a walk. She happened to pass by a Catholic church and decided to go in. While she was there a group of teenage boys came in went up to the front of the church, genuflected before the Blessed Sacrament in the tabernacle, knelt down for a couple of minutes, stood up, genuflected again and went on their way.

These boys were expressing what the Church has always taught: Do not, then, regard the eucharistic elements as ordinary bread and wine: they are in fact the body and blood of the Lord, as he himself has declared. Whatever your senses may tell you, be strong in faith.

You have been taught and you are firmly convinced that what looks and tastes like bread and wine is not bread and wine but the body and the blood of Christ. You know also how David referred to this long ago when he sang: Bread gives strength to man’s heart and makes his face shine with the oil of gladness. Strengthen your heart, then, by receiving this bread as spiritual bread, and bring joy to the face of your soul. (From The Jerusalem Catecheses, used in the Office of Readings for Saturday within the Octave of Easter.)

This is the reason that Fr Jean-Marc Fournier, chaplain to the Paris Fire Brigade, rescued the Blessed Sacrament from the burning Notre-Dame de Paris Cathedral in Holy Week.

The visit of those Canadian teenage boys to the Blessed Sacrament was the German woman's My Lord and my God! moment. She became a Catholic shortly afterwards. Those boys had no idea of how their simple expression of their faith had so profoundly touched the life of a person whom they may not have even noticed.

The moment that St Thomas said My Lord and my God! was truly an 'eternal' moment. It led to his martyrdom and to his living with God for all eternity.

My German-Canadian friend's moment is 'eternal' in the same way. It led her into a deeper relationship with the Lord Jesus and with all the members of the Church and points towards an eternity with God himself.

Every such moment in our lives is meant to be eternal, a moment when we experience the presence of God's love so clearly, a moment that we continue to carry with us, sometimes consciously but perhaps more often not being aware of it, a moment that leads us to eternal life.

I think that we my legitimately think of those many moments in the way St John in his gospel writes of the many other signs [miracles]that Jesus did, which are not written in this book. These moments are graces given by God so that you may come to believe that Jesus is the Messiah, the Son of God, and that through believing you may have life in his name. 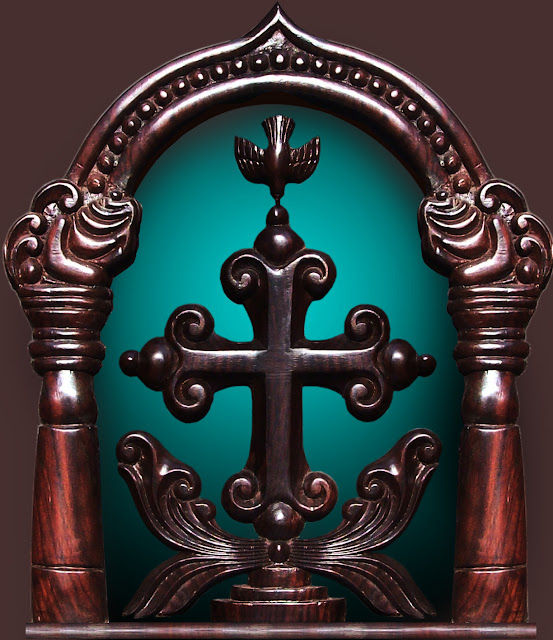 The Mar Thoma Sliva or Saint Thomas Cross, the symbol of the Syro-Malabar Church [Wikipedia]

Nearly nine per cent of nurses in the Republic of Ireland are from India and most of these are Catholics from Kerala who belong to the Syro-Malabar Catholic Church that traces its origins back to St Thomas the Apostle. These, as well as the Syro-Malankara Catholics in Kerala, are in full communion with Rome.

I have met many Keralite Catholics here in Ireland and also in Britain and know how fervent they are in living their faith.There are Masses in the Syro-Malabar Rite every Sunday in the Archdiocese of Dublin.

May St Thomas the Apostle, whose My Lord and my God! is the most explicit expression of faith in Jesus Christ in the whole of the New Testament, continue to watch over them.
Antiphona communionem Communion Antiphon Cf John 20:27
Setting by contemporary Scottish composer James MacMillan
Mitte manum tuam, et cognoscere loca clavorum,
Bring your hand and feel the place of the nails,
et noli esse incredulus, sed fidelis, alleluia, alleluia.
and do not be unbelieving but believing, alleluia, alleluia. 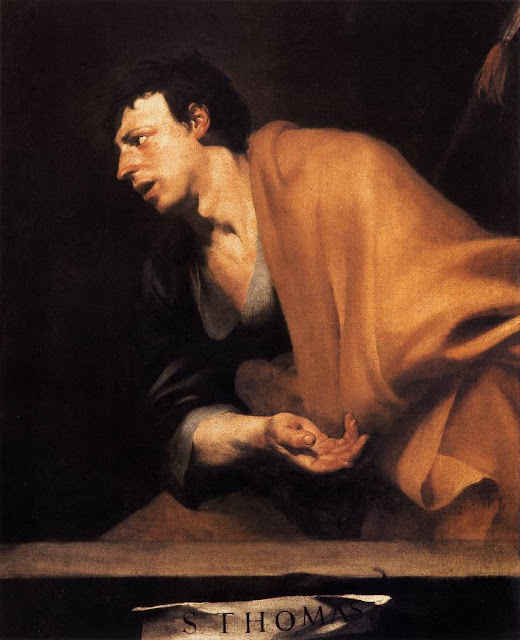