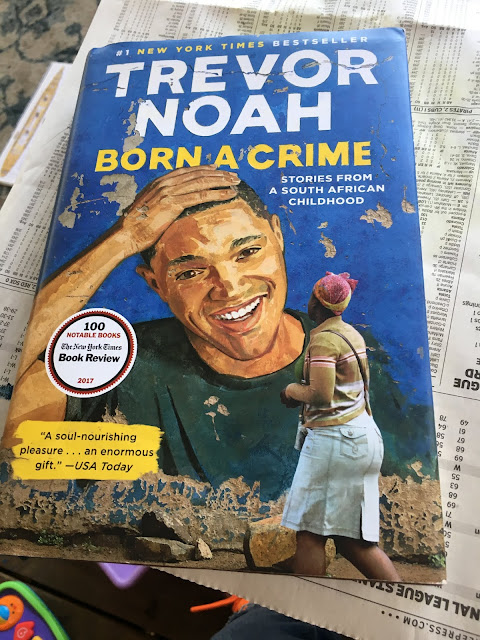 While we were in San Francisco, I finally read Born a Crime by Trevor Noah after hearing so many good things about it.  It seemed like every time I turned around, good reviews were popping up.  I'm so glad I finally read it, because I give it an easy 5 stars.  Why did I like this book and feel I can recommend it?Microcosm of the Civil Rights MovementKnow thyself is an important proverb, but self-awareness is the hardest lesson to come by.  I almost want to say it would be irresponsible not to read books like this, but this book is one of a kind. Looking at the apartheid in South Africa is like looking at a subset of American racism.  Trevor Noah was literally born a crime, because he had a white father and black mother. He was a literal misfit and a reflection of a society with broken laws and a corrupt perspective, in his own society.  His humor and clairvoyance are credit to that. To every instance, I could compare the changing of the laws and the mishaps and adventures as applied to a collective African American existence, with its massive implications and immense baggage in our country today.  However, you can see it with the clarity of an objective situation.Real stories from a real life
Trevor Noah is honest and never shies away from the truth, even if it makes him vulnerable, salty, or just very, very human.  I loved the tone of this book, which I think is so hard to come by from books coming out right now that have a bit of spice.  He is able to stay grounded with a grown-up perspective throughout his misadventures, and it is certainly springing from an awesome personality and a wonderful childhood with a wonderful mother. Now that race riots have become a norm and a staple of 2020, it is much easier to understand the anger and hatred bubbling up and reflecting the violence in our popular culture as well as in a land with many, many corrupt police officers.  The time has come to wake up and become alert toward this form of systemic racism.South African American PerspectiveSpoiler alert *but not really* Trevor Noah ended up in the U.S. and works as a comedian on Comedy Central late night TV.  I appreciate the overall perspective because it isn't tied down to South Africa.  Coming to the U.S. really rounded out his viewpoint and I enjoyed seeing where his wisdom landed at the time of writing this book.  He is an excellent follow on social media, and he daily makes me laugh out loud. He is a stable voice in a very unstable world.Humorous Political Commentary
Trevor Noah didn't just study the politics of racism, rather, he lived it.  His daily life as a child (and as he grew up with stories of adolescence and young adulthood) was written inside the bonds of apartheid and a deeply divided country.  Because this situation is so much more recent than the end of slavery in the U.S., it is still and fresh and moving topic to learn about.  He has brought this insightful perspective to our land(s).  I hope his stories will be moving to others as they were to me!Great Storyline
Amidst the drama of family life, I wasn't sure Noah would pull off a satisfying, deeply wrought plotline, but OH BOY HE DID.  I told Stephen Iwasn't sure what to expect from this book, but as I finished it I was like, HOLY SH*T this did not disappoint. In the least.  His stories of violence, familial malevolence, personal tragedy, and brushes with death inspired me to take zero minutes of each day I am given as a gift on this earth for granted.  He has seen some bullcrap, and it makes the book and his ability to write, see the world, and even poke fun at adversity, shine fantastically.The next time you are in a bookstore (I love to visit local bookstores whenever I travel- pure bliss) you may want to pick this one up. You will not regret reading it cover to cover as I did.
(This was originally written and published in  October, 2018)