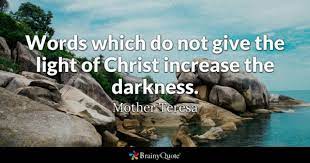 A friend gifted me with the Word on Fire Bible/The Gospels which I have found to be very nice.  As I was reading a reflection in it ("Unpacking Jesus' Greatest Sermon") by Bishop Robert Barron, I was caught in his commentary on the Sermon on the Mount (Matthew 5).

In describing the people of Israel, Bishop Barron said that "Israel knew itself to be the people with the definite mission to become holy and thereby to render the world holy.  But instead, Israel fell into greater and greater sins; and instead of being the catalyst for the conversion of the world, the world was continually overwhelming and enslaving Israel."

How many similarities can you find in this excerpt from his reflection on Israel, to the Church and her people (us!) today?

We, as disciples of Jesus, are also called to holiness, and through God's grace, we have the potential to have an impact on the world around us.

Of course, like Israel, we are quite imperfect in fulfilling the mission of Christ. You could even argue that we, too, allow ourselves to be enslaved by the world and rather than converting it, we let it overwhelm us.

The first step in changing this equation is for us to recognize what is happening, and then set about working on ourselves so that we become committed disciples, close to God, living out our faith intentionally.

By the unlimited power of God working in and through us, we can one day witness the kingdom of God, here on earth.