Fr Thadeus Nguyen Van Ly﻿
I am conscious of the Church in Vietnam in a personal way because I am giving a weekly class to the eleven aspirants of the Capuchin Tertiary Sisters of the Holy Family here in Bacolod City. The group includes six young women from Vietnam, the first to enter the congregation. The Church in Vietnam has suffered greatly in modern times and harrassment is not yet absent, as the story of Fr Thadeus Nguyen Van Ly, 64, shows. 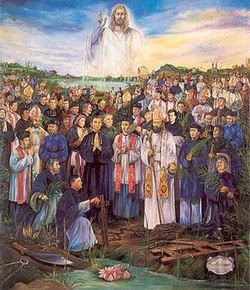 ﻿The Martyrs of Vietnam, celebrated by the Church on 24 November.
In the May-June 2006 issue of Misyon, which I edit on behalf of the Columbans in the Philippines, I published an article by the Cardinal. Misyon was then a printed magazine. We are gradually putting all issues from the first in 1988 online but this particular article isn't yet there. Below is the text, with an introduction.
PREACHING HOPE FROM PRISON
By François-Xavier Cardinal Nguyên Van Thuán
﻿The extraordinary story, in his own words, of Vietnamese Cardinal Nguyên Van Thuan, Coadjutor Archbishop of Thành-Phô Hô Chí Minh (formerly Saigon) from 1975 till 1994. Just three months after his appointment he was imprisoned by the communist government. He spent thirteen years in jail, nine of them in solitary confinement. In 1998 he was appointed President of the Pontifical Council for Justice and Peace in the Vatican. He gave the Lenten retreat to Pope John Paul and his staff in 1999 and died in Rome on 16 September 2002. Here are some edited extracts from the cardinal’s story.

﻿Saved by prayer
In my initial period in prison I spent many months in an extremely narrow space without windows, half suffocated by the heat and humidity. Often I had great difficulty in breathing. They tortured me by leaving me under lights day and night for ten days and then depriving me of all light for long periods. One day in the darkness I noticed a tiny hole through which the light shone. From then on I used to put my nostrils there to breathe more easily.

Whenever there were floods snakes used to invade my cell and sometimes climbed my legs to avoid the water. They used to stay with me until the floods passed. I had no toilet but since I received hardly any food I had little need of one. My daily rations consisted of some rice and vegetables cooked with salt. From five in the morning until 11:30 at night there was a constant din of voices over loudspeakers. To distract myself I did exercises, jumped, danced, sang and prayed. Prayer saved my life. In moments of great suffering, sometimes when I wanted to pray I couldn’t. I was desperately tired, sick and hungry . . . often I was tempted to despair and rebellion. But the Lord always helped me.

﻿
Learning again how to pray

In my later years in prison five policemen guarded me. Some even studied Latin to censor any documents or telegrams sent to the bishops from Rome. One day a policeman asked me: ‘Can you teach me some song in Latin?’ I replied, ‘I’ll sing some and you can choose.’ He chose the Veni Creator (Come Holy Spirit) and asked me to write out the words. I did so not really expecting that he would learn them. But in a few days he had learned them really well and sang them every morning while he was on guard. I thought to myself: ‘When an archbishop cannot pray, the Lord sends him a policeman to sing the Veni Creator and help him to pray!’

On another occasion a farmer came to the prison and asked permission to visit me. The police permitted it and he spent a few minutes with me. When he was leaving he asked: ‘Please, pray for me,’ and he added: ‘Father, one prayer from you in prison is worth a hundred offered in freedom.’ That day the Holy Spirit sent a farmer to teach me the value of prayer in prison.

While in prison I wrote several books. All our religious literature had been burned and permission to publish new ones refused. I wondered how, as a pastor, I could encourage the faithful. At that time I was in a closely guarded cell but children were allowed to visit me. One day I said to one of them: ‘Ask your mother to buy me a calendar-block.’ When I received it I wrote my thoughts on the back of a sheet each night and in this way I produced my first book, Pilgrims on the Road of Hope. I wrote the second, The Way of Hope in the Light of the Word of God in the Council in my years in exile, 1,700 kilometers from my diocese. At another time when I was feeling very low and had no desire to write I received a request from the Holy Father asking me to write some spiritual exercises. These later became the work Witnesses to Hope.

I have personally experienced the sorrow of a pastor forbidden to care for his people and forced to abandon his diocese. It caused me great torment to be in prison while the people were abandoned. But I discovered that it had all been God’s work. One night I sensed a voice in my heart saying: ‘François, God holds you in his hands. Always seek his will. God knows what he is doing. He will seek other collaborators who work better than you. Be at peace.’ That night I experienced a deep peace in my heart and I decided to seek God’s will every minute of my life.

Under house arrest,
Befriended by jailers
At one stage while in prison five young jailers, university students, guarded me. One reason that I survived was because of their friendship.

Those in charge had forbidden them to speak to me. Initially my guards were changed every fifteen days. Prison authorities believed the guards risked being contaminated if left with me for any length of time. Eventually they stopped changing them because apparently they were afraid I would contaminate the whole force. And so the young students became my friends. The love of Christ has great power to change people.

I would chat with them through the door about my life, the various countries I had visited, my family, my childhood and so on. I taught them English, French, and even a little Russian. One day I asked one of them to bring something to trim a piece of wood. He did and I was able to make a cross. Even though all religious symbols were prohibited, I now had a cross in my quarters. I hid it in a bar of soap. Another time I asked for a piece of wire and a pair of pliers. My friendly policeman said, ‘I will bring them but you have to finish in four hours’ – the length of his particular shift. In four hours I had fashioned a chain for my cross. The cross was later enclosed in silver and it is the cross and chain I still wear.

The day I was arrested I had to leave everything behind me. The following day I was allowed to write and ask my friends to bring my clothes, toothpaste and other personal needs. I also asked them to include some wine ‘as medicine.’ My friends understood. They sent me a little bottle of Mass-wine labeled ‘Medicine for Stomach Aches’ and also some hosts hidden in a little burner used to keep the humidity at bay.

Every night I kept a tiny piece of bread for the following day’s Eucharist. And so every day for many years I had the joy of celebrating Mass with three drops of wine and one of water in my palm. This was my altar, my cathedral. For me it was the true medicine of body and soul something to stave off death in order to live for ever in Christ.

O mighty and eternal God,
Father, Son and Holy Spirit
I offer thanks for giving to the Church
the heroic testimony of Cardinal Francis Xavier Nguyên Van Thuân.

The suffering he experienced in prison,
which he united with the crucified Christ
and commended to the maternal protection of Mary,
is for the Church and the world a shining witness of unity and forgiveness,
and of justice and peace.

His loving person and his Episcopal ministry radiate the light of faith,
the enthusiasm of hope and the warmth of love.

Now, my Lord, through his intercession and according to your will,
grant me the grace I am imploring in the hope that
he will soon be elevated to the honour of sainthood.