'What, then, will a man gain if he wins the whole world and ruins his life?' Sunday Reflections. 22nd Sunday Ordinary Time Year A, 28 August 2011 Sir Thomas More, Hans Holbein the Younger, painted 1527
Readings (New American Bible, used in the Philippines and USA).
Gospel Matthew 16:21-27 (Jerusalem Bible, used in Australia, England & Wales, Ireland, Scotlanc)﻿
Jesus began to make it clear to his disciples that he was destined to go to Jerusalem and suffer grievously at the hands of the elders and chief priests and scribes, to be put to death and to be raised up on the third day. Then, taking him aside, Peter started to remonstrate with him. 'Heaven preserve you, Lord;' he said 'this must not happen to you'. But he turned and said to Peter, 'Get behind me, Satan! You are an obstacle in my path, because the way you think is not God's way but man's.' Then Jesus said to his disciples, 'If anyone wants to be a follower of mine, let him renounce himself and take up his cross and follow me. For anyone who wants to save his life will lose it; but anyone who loses his life for my sake will find it. What, then, will a man gain if he wins the whole world and ruins his life? Or what has a man to offer in exchange for his life? 'For the Son of Man is going to come in the glory of his Father with his angels, and, when he does, he will reward each one according to his behaviour.

The above is one of the great dramatic scenes in a movie or a play. A Man for All Seasons, based on the life of St Thomas More, was written by Robert Bolt. It began life as a radio play on the BBC in 1954, was reworked as a one-hour TV play in 1967 and then as a stage play in 1960, a great success in London and on Broadway. The 1966 film, produced and directed by Fred Zinnemann, won six Oscars, including Best Picture and Best Actor. The latter was for Paul Scofield who played Sir Thomas More.
In this scene during the trial Sir Richard Rich (played by John Hurt), an ambitious young man who once tried unsuccessfully to bribe the upright More, is being questioned by Thomas Cromwell (played by Leo McKern), perjures himself. As the witness leaves Sir Thomas asks to see his chain of office and learns that Sir Richard had just been appointed Attorney General for Wales. He looks sadly at Richard and says ironically, 'For Wales? For, Richard, it profits a man nothing to give his soul for the whole world. But for Wales?'
This year has seen a number of long-term rulers toppled, in Tunisia, in Egypt and now in Libya. Each time a dictator goes I ask myself, 'Will they never learn?' None ends up as a free man. St Thomas in the trial scene says 'I am a dead man'. But, unlike Sir Richard Rich, he is a free man. He takes Jesus at his word: 'anyone who loses his life for my sake will find it'. He then goes on to quote to Richard the next sentence, 'it profits a man nothing to give his soul for the whole world' ('What, then, will a man gain if he wins the whole world and ruins his life?' in the Jerusalem Bible translation). 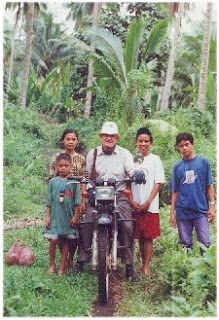 ﻿
This Sunday is the tenth anniversary of the death of a Columban confrere and close friend who, like St Thomas More, died violently. Fr Rufus Halley (in photo above) was ambushed and shot dead while riding on his motorbike from an inter-faith meeting in Balabagan to his neighbouring parish in Malabang, Lanao del Sur, in the southern Philippines, both towns and the area predominantly Muslim. Father Rufus came from a privileged background in Ireland and spent the earlier years of his priesthood in a Catholic area of the Philippines, near Manila. He felt called by God to move to live among Muslims in the Prelature of Marawi, an area where only about five percent are Catholic and nearly all the others Muslim. He lived in constant tension, sometimes danger. He learned two new languages, Maranao, that of the majority of the Muslims in the area, and Cebuano-Visayan, that of the Christians.
Gaudencio Cardinal Rosales, Archbishop of Manila, wrote an article about Father Rufus for Misyon, the online Columban magazine I edit, for the July-August 2006 issue, when we still were a print magazine. The Cardinal got to know Father Rufus when he was a young auxiliary bishop of Manila with responsibility for the area where Father Rufus was assigned. Here are some of the things the Cardinal wrote.
Though born into privilege, like St Thomas More, Father Rufus had no interest in clinging on to it. Though honoured as a priest by the people in his parish he chose to let go of the prestige that carried in order to answer God's call to live in a place where he would experience insecurity and danger. Like St Thomas More, he took Jesus at his word: 'If anyone wants to be a follower of mine, let him renounce himself and take up his cross and follow me. For anyone who wants to save his life will lose it; but anyone who loses his life for my sake will find it'.
Very few of us will be called to martyrdom or to violent deaths because of being Catholic Christians. But what are the areas in our lives where we are prepared to ignore what is right in order to have some passing power or privilege, such as Sir Richard Rich sought? It may not be a matter of bribery or perjury but of excusing ourselves because 'everyone does it', 'things are different now', etc, etc.

St Thomas More is the patron saint of statesmen, politicians and lawyers.
A note on Wales

Wales, in red, is now part of the United Kingdom but has its own language, far older than the English language, and national assembly, (a regional parliament with limited powers). It is about one-and-a-half times the size of the island of Negros in the central Philippines, where I live, but, with 3,000,000 people only three-quarters of the population of the island.
Fr Rufus Halley Philippines St Thomas More Sunday Reflections wales