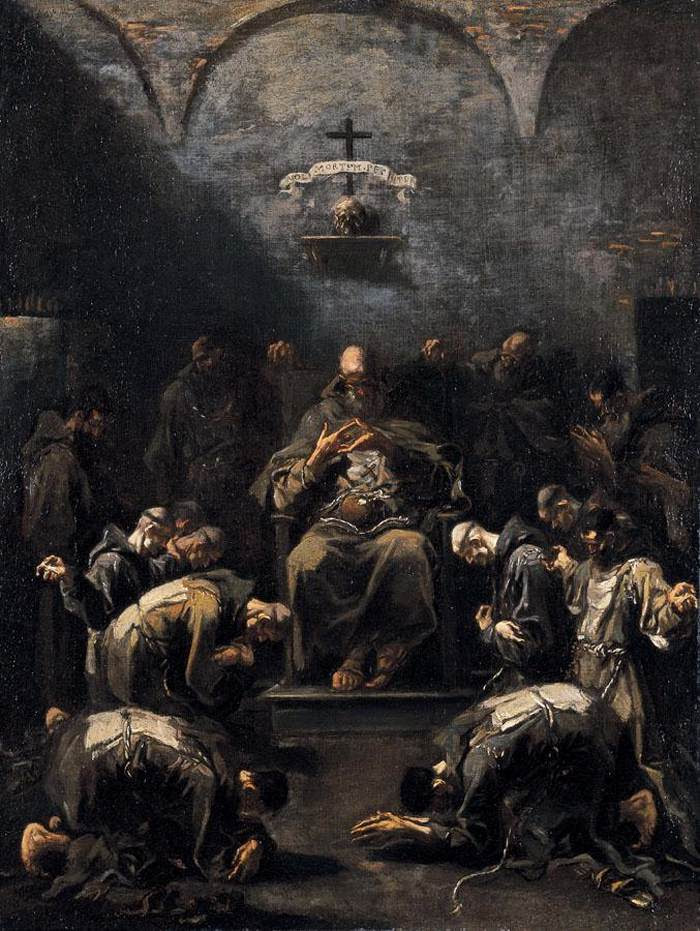 Gospel Matthew 18:15-20 (Jerusalem Bible: Australia, England @ Wales, Ireland, Scotland).
Jesus said to his disciples: 'If your brother does something wrong, go and have it out with him alone, is between your two selves. If he listens to you, you have won back your brother. If he does not listen, take one or two others along with you: the evidence of two or three witnesses is required to sustain any charge. But if he refuses to listen to these, report it to the community; and if he refuses to listen to the community, treat him like a pagan or a tax collector.
'I tell you solemnly, whatever you bind on earth shall be considered bound in heaven; whatever you loose on earth shall be considered loosed in heaven.
'I tell you solemnly once again, if two of you on earth agree to ask anything at all, it will be granted to you by my Father in heaven.
For where two or three meet in my name, I shall be there with them.'
Soiscéal Matha 18:15-20 (Gaeilge, Irish)
San am sin dúirt Íosa lena dheisceabail “Má dhéanann do bhráthair peaca i d’aghaidh, gabh chuige á áiteamh air is gan ann ach é agus tú. Má éisteann sé leat, tá tú tar éis do bhráthair a thabhairt leat; ach mura n-éisteann, beir leat duine nó beirt eile, chun go mbeadh focal a dó nó a trí d’fhinnéithe ag deimhniú gach scéil. Má dhiúltaíonn sé éisteacht leo sin, inis don eaglais é; agus má dhiúltaíonn éisteacht leis an eaglais féin, bíodh sé ina phágánach agus ina phoibleacánach agat.
“Deirim libh go fírinneach, gach uile ní a cheanglaíonn sibh ar talamh beidh siad ceangailte ar neamh, agus nithe ar bith a scaoilfidh sibh ar talamh beidh siad scaoilte ar neamh.
Agus deirim go fírinneach rud eile libh má bhíonn beirt agaibh ar talamh ar aon aigne faoi rud ar bith a bhíonn le hiarraidh acu, beidh sé le fáil acu ó m’Athair atá ar neamh. Óir, mar a mbíonn beirt nó triúr tagtha i gceann a chéile i m’ainmse, bím féin ansin ina measc.”
+++
The painting of Alessandro Magnasco ties in with both aspects of the gospel, the call to repentance, which the Church has an obligation to do in the name of Jesus, and the invitation to pray with one another for needs that we see.
I remember years ago having to deal with a dispute between two young seminarians under my care. I had come back on Sunday night, drained after a Worldwide Marriage Encounter weekend. One of the things we learn there is that a couple have the power to forgive through the sacrament of matrimony. In this sacrament Jesus is more than being  'there with them'. He is the one who makes husband and wife one.
Though I wanted to go to bed I knew I had to deal with this dispute. I met each of the two separately and asked each to describe factually what happened, what he was feeling and what he wanted to happen. I then sent each to the chapel to tell the Lord what he had told me and that I would then meet them together after half an hour. One was hardly there a few minutes when he came out and said 'He won't talk to me'. I asked 'Who?' 'The other student'. 'I told you to talk to the Lord', I reminded him, while inwardly smiling.
When they came out I met them together. After their prayer they were both ready to forgive each other. It also helped when I told them that each had described the incident in exactly the same way. In this case the two witnesses were the two 'perpetrators', though the other seminarians had drawn the matter to my attention as soon as I had arrived in the house. They were both young me of good will who wanted to follow Jesus with generosity. And when they were in the chapel together each was praying to Jesus for what he desired - reconciliation.
Jesus has given us his solemn word that in such a situation God the Father cannot but listen to our prayer.
+++
The video above is or the Kyrie eleison, Lord, have mercy, from the Missa de Angelis, the best known and most widely used of all the Masses in Gregorian Chant. Gregorian Chant gets its name from St Gregory the Great, pope from 590 to 610, on whose feast, 3 September, I am writing this. Vatican II's Constitution on the Sacred Liturgy, promulgated 4 December 1963, says in No 116: 'The Church acknowledges Gregorian chant as specially suited to the Roman liturgy: therefore, other things being equal, it should be given pride of place in liturgical services'.
No 119 says, 'In certain parts of the world, especially mission lands, there are peoples who have their own musical traditions, and these play a great part in their religious and social life. For this reason due importance is to be attached to their music, and a suitable place is to be given to it, not only in forming their attitude toward religion, but also in adapting worship to their native genius'.
The Missa Luba is described in Wikipedia as 'a version of the Latin Mass based on traditional Congolese songs. It was arranged by Father Guido Haazen, a Franciscan Friar from Belgium, and originally performed and recorded in 1958 by "Les Troubadours du Roi Baudouin", a choir of Congolese children from Kamina'.  At the time of the recording what is now called the Democratic Republic of the Congo was still the Belgian Congo and the saintly King Baudouin the monarch. The recording was released internationally in 1963 and I remember it was very popular with my fellow seminarians, though we never tried to sing it.


The Missa Luba anticipated what Vatican II would encourage.
Kyrie Eleison is the only part of the Ordinary of the Mass in the Latin Rite that is in Greek. No matter what language we sing or say it in it is especially appropriate for today's Mass.