'The greatest among you must be your servant'. Sunday Reflections, 31st Sunday of Ordinary Time Year A 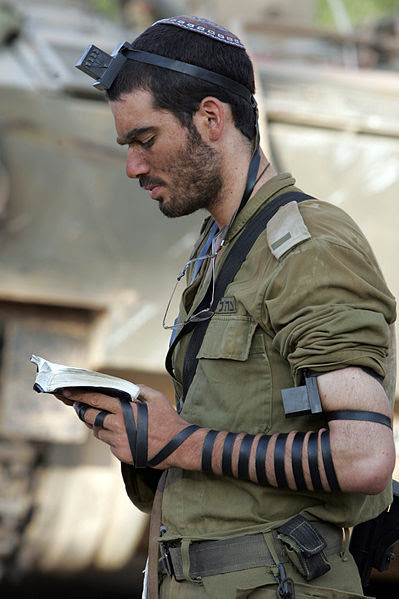 An Israeli soldier wearing phylacteries (tefillin), on his forehead and on his left arm, while praying.
Readings﻿
Gospel Matthew 23:1-12 (Jerusalem Bible: Australia, England & Wales, India [optional], Ireland, New Zealand, Pakistan, Scotland, South Africa)
Addressing the people and his disciples Jesus said, 'The scribes and the Pharisees occupy the chair of Moses. You must therefore do what they tell you and listen to what they say; but do not be guided by what they do: since they do not practise what they preach. They tie up heavy burdens and lay them on men's shoulders, but will they lift a finger to move them? Not they! Everything they do is done to attract attention, like wearing broader phylacteries and longer tassels like wanting to take the place of honour at banquets and the front seats in the synagogues, being greeted obsequiously in the market squares and having people call them Rabbi.


+++
I am posting this in St Columban's, Dalgan Park, Ireland, where I studied for the priesthood from 1961 to 1968. I arrived in Ireland yesterday morning from the Philippines﻿ and here this morning.
One of my philosophy teachers here, the late Fr Joseph McGlade, served as a chaplain in the Royal Air Force during World War II. Many other young Irish Columbans were chaplains in the British forces at that time since they couldn't go to our missions in China, the Philippines, Korea and Burma. Father Joe told us that one of his Protestant colleagues used to quote today's gospel and criticise the Catholic chaplains for allowing themselves to be called 'Father'. Yet he didn't mind being called 'Padre', the Spanish for 'Father', and widely used in the English-speaking world as a title for military chaplains.
Jesus is reminding us that God our Father is the source of all life and that he himself is the only one who can teach the fulness of truth. He calls us to teach only the truth, not only in word but in deed. He isn't forbidding us from showing proper respect to our earthly fathers or to those who teach us. Rather he is calling us to be fully rooted in the love of God the Father and in the Truth that he himself, Jesus Christ, is. He tells us, 'the greatest among you must be your servant'.

﻿Fr Francis Vernon Douglas
This morning here in Dalgan Park I concelebrated at a Mass in which we remembered nine Columban priests who died violently in the Philippines. Fr Francis Vernon Douglas from New Zealand was scourged at a pillar in the Catholic church in Paete, Rizal, near Manila, by Japanese military police, taken  away and never seen again and died on 27 March 1943. It is believed that he refused to break the seal of confession.
Frs Peter Fallon, John Henaghan, Patrick Kelly and Joseph Monaghan were taken away by the Japanese from their parish in Malate, Manila, on 10 February 1945 and never seen again.Their colleague Fr John Lalor, was killed three days later by an American bomb that struck Malate Catholic School that had been turned into a hospital. He had also suffered at the hands of bandits in China before being transferred to the Philippines.
Fr Thomas Flynn was killed by Communist guerrillas in his parish in Labrador, Pangasinan, on 30 October 1950. He, like Father Douglas, had been a diocesan priest before joining the Columbans.
Frs Martin Dempsey and Rufus Halley were both murdered in the same area in Lanao del Sur, Mindanao, Father Martin on 19 October 1970 and Father Rufus Halley on 28 August 2001. Siblings of both of them were at the Mass along with relatives of the other Irish Columbans. Fr Dan O'Connor, a Columban from New Zealand, based in Pakistan and studying in Ireland at the moment, represented the relatives of Fr Douglas.

Philippine Ambassador Ariel Y. Abadilla was present at the Mass and after lunch laid a wreath in memory of the priests who had died violently in his country at the foot of the cross in the Columban cemetery in Dalgan Park.
These priest were not the kind of religious leaders Jesus had in mind when he said, 'You must therefore do what they tell you and listen to what they say; but do not be guided by what they do: since they do not practise what they preach'. These were men who stayed with their people laid down their lives to show the love of God the Father and whose lives and deaths revealed the Truth who is Jesus our Teacher, who taught us above all the love of God the Father by laying down his life in obedience to his will.
Ireland New Zealand Philippines priests Sunday Reflections