‘Let what you have said be done to me.’ Sunday Reflections, 4th Sunday of Advent Year B The angel Gabriel was sent by God to a town in Galilee called Nazareth, to a virgin betrothed to a man named Joseph, of the House of David; and the virgin's name was Mary. He went in and said to her, 'Rejoice, so highly favoured! The Lord is with you.' She was deeply disturbed by these words and asked herself what this greeting could mean, but the angel said to her, 'Mary, do not be afraid; you have won God's favour. Listen! You are to conceive and bear a son, and you must name him Jesus. He will be great and will be called Son of the Most High. The Lord God will give him the throne of his ancestor David; he will rule over the House of Jacob for ever and his reign will have no end.' Mary said to the angel, 'But how can this come about, since I am a virgin?' 'The Holy Spirit will come upon you' the angel answered 'and the power of the Most High will cover you with its shadow. And so the child will be holy and will be called Son of God. Know this too: your kinswoman Elizabeth has, in her old age, herself conceived a son, and she whom people called barren is now in her sixth month, for nothing is impossible to God' 'I am the handmaid of the Lord,' said Mary 'let what you have said be done to me.' And the angel left her.


+++
﻿Mollie was a cousin of my mother. She grew up near Tara, County Meath, where the high kings of Ireland once lived and which is in sight of St Columban’s, Dalgan Park, where I studied from 1961 until 1968. Mollie married Jimmy who was from the same area. He worked for the Land Commission.
After the birth of their second child Mollie was bedridden for three years, with a serious problem in her back. Though she recovered to some degree from that she never had good health again and went blind in the last few years of her life.

I had met Mollie and Jimmy as a child when I attended the funeral of Mollie’s mother. During my years in Dalgan Park I wrote them and renewed the contact between the families. I visited them regularly in the small cottage that was their home and always felt the warmth of their welcome along with their simplicity. Jimmy once said to me, ‘We couldn’t be happier here. We have the basic things we need. Lord Dunsany couldn’t have more than we have’. (The Dunsany ancestral castle is near where Jimmy and Mollie lived. The Dunsany family name is Plunkett and they are distantly related to St Oliver Plunkett.)

When Jimmy and Mollie exchanged their wedding vows they had no idea that ‘in sickness and in health’ would mean serious sickness and poor health for Mollie for most of their married life. With their simple, strong and deep faith they accepted what life brought. Their love for each other was something I felt drawn into each time I visited their home.

When Mary said 'yes' to God's message she had no idea what it would bring her. She accepted the future in total faith and draws us into the Love who is her Son, our Brother and Saviour, the Risen Lord.

‘Let what you have said be done to me.’

The verses above follow the words of the Angelus (below). Here is my attempt at translating the refrain from Spanish to English:

VIRGIN MOTHER, OUR LADY,
REMEMBERING THE INCARNATION,
ALL YOUR CHILDREN SING TO YOU
AS THE STAR OF SALVATION. 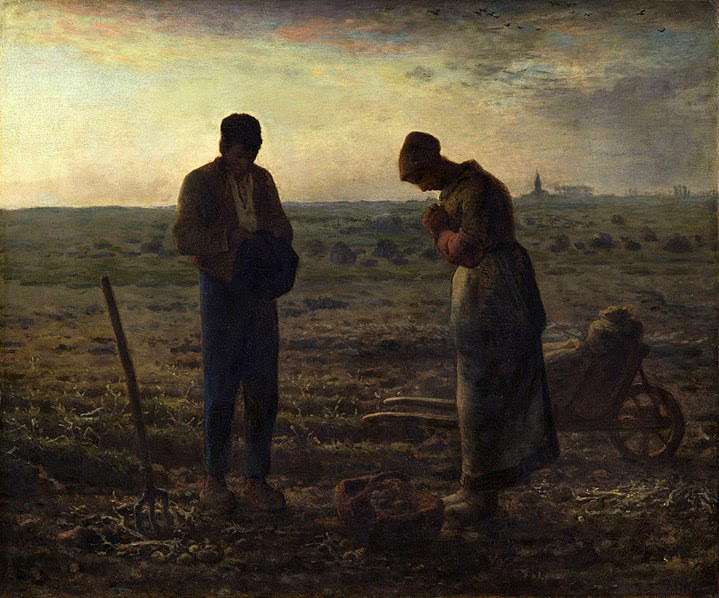 The Angelus, Jean-François Millet (painted 1857-59)
V. The angel of the Lord declared unto Mary.
R. And she conceived by the power of Holy Spirit.

V. Behold the handmaid of the Lord.
R. Be it done unto me according to your Word.

V. And the Word was made flesh.
R. And dwelt among us.

V. Pray for us, O Holy Mother of God.

R. That we may be made worthy of the promises of Christ.

Let us pray: Pour forth, we beseech thee, O Lord, Thy grace into our hearts, that we to whom the incarnation of Christ Thy Son was made known by the message of an angel, may by His Passion and Cross be brought to the glory of His resurrection; through the same Christ our Lord. Amen.
Advent Angelus Sunday Reflections