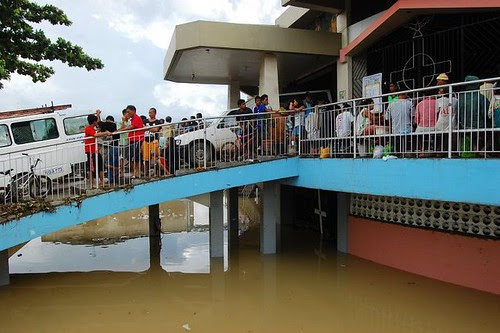 San Lorenzo Ruiz Church, Iligan City, a temporary evacuation center.
The Columbans are very familiar with both Iligan City and Cagayan de Oro City, the two places most badly hit by Typhoon Sendong/Washi last weekend. 'Washi' was the international code-name for the storm, 'Sendong' the Philippine name. Columban Fr Rolly Aniscal lost a cousin and her two children in Cagayan de Oro. The children's bodies haven't been recovered yet.

I'm posting photos taken in Iligan City, which is about 90kms from Cagayan de Oro City.

New Zealander Fr Paul Finlayson and his team in the Columban-run Holy Rosary Parish, Agusan, Cagayan de Oro, are taking care of 25 families whose homes were destroyed or badly damaged. Venus Guibone, who worked in Ireland as a Columban lay missionary whose house was very badly damaged is among those being accommodated at St John Vianney Theological Seminary.
Full post here.
faith Philippines typhoon