"The Pianist:" Brutality and Beauty 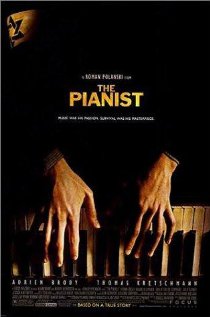 I'd forgotten all about the movie "The Pianist," which was released in 2002 and won the Palme D'Or until several of my freshman students began talking to me about it. They had seen the parts of this movie in eighth grade, during a quarter-long study of the Holocaust and were deeply moved by it. I'd never seen the movie and wanted to be able to talk with them about it.

This is a brutal, magnificent movie. It speaks of the human spirit and its struggle to survive. Based largely on the true story of classical pianist Wladyslaw Szpilman, it gives witness to the life of  gifted Polish pianist, a Jew, who managed to survive in Warsaw during World War II while hundreds of thousands of Jews were exterminated in death camps. Szpilman is portrayed by actor Adrien Brody, then 29, who won an Academy Award for his work.
Read more »
film music Poland War