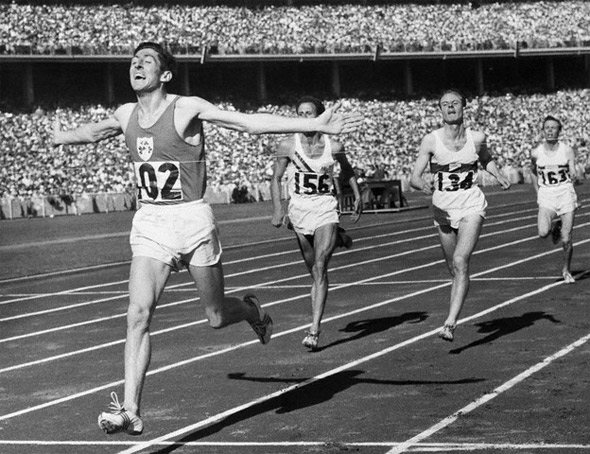 My mother wasn't particularly into sports but I remember her running up the stairs early on Saturday 1 December 1956 to wake up my brother and me with the great news that Ronnie Delany had won the 1500 metres in the Melbourne Olympics. I was 13 then, eight years younger than the Gold medallist. He has been a hero of mine ever since and last November I met him for the first time at the annual dinner of the past pupils' union of O'Connell Christian Brothers' School in Dublin where Ronnie had done the first three years of his secondary education.

When I told him that he had been a hero to me down through the years he expressed a simple delight that for me is the mark of true humility. 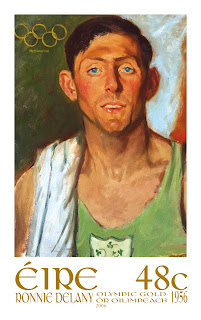 Stamp issued in Ireland on the 50th anniversary of Delany's win

In one interview he said, Religion played an integral part in my life and still does, I did resort to prayer for comfort, to create confidence and assurance and I always prayed intensely before my races that I would receive the ability to perform to my level of capability. [Emphasis added]. In another interview in 1997 he said that before the Melbourne final, I resigned myself quietly to the will of God and prayed not so much for victory but the grace to run up to my capabilities.

One of the images that was captured in photos and in video is of Delany kneeling down after his victory and quietly praying, ending with the Sign of the Cross. Last Sunday I heard him on RTÉ Radio 1 on Bowman Sunday, a programme in which John Bowman features items from the archives. In one interview, done recently I think, Ronnie Delany said, I had to say 'thank you' to God for the gift I was given'. He spoke of praying to favourite saints before a race, especially to Mary. When he came home from Melbourne some individual or some group presented Ronnie with a specially commissioned piece of Waterford Crystal which showed him kneeling in prayer after the race.

In the video above Irish broadcaster Jimmy Magee presents four Irish Olympic medallists. The first 2:29 minutes is devoted to Ronnie Delany and shows him praying after winning.

On a popular Sunday radio programme broadcast the day after Delany's victory a ballad written for the occasion had the refrain, Good lad, Ronnie, we're proud you won. You proved you were best in the long run.

While he doesn't run quite as fast at 77 as he did when 21 he's still very much on the go as he carries the Olympic Flame in Dublin in one of very few fine days this summer.

Six years ago Ronnie said, I’m very lucky. I’ve had a fulfilled life. My life is my family but I have somehow always managed to maintain the myth of the Olympic champion. May God grant him many more years to inspire not only his grandchildren but all Irish people to have a faith will lead them in whatever endeavour to resign themselves quietly to the will of God and pray not so much for victory but the grace to run up to their capabilities.
Ireland Melbourne Olympic Games Prayer Ronnie Delany