'Simon, son of John, do you love me?' Sunday Reflections, 3rd Sunday of Easter Year C After this Jesus revealed himself again to the disciples by the Sea of Tiberi-as; and he revealed himself in this way. Simon Peter, Thomas called the Twin, Nathana-el of Cana in Galilee, the sons of Zebedee, and two others of his disciples were together. Simon Peter said to them, "I am going fishing." They said to him, "We will go with you." They went out and got into the boat; but that night they caught nothing. Just as day was breaking, Jesus stood on the beach; yet the disciples did not know that it was Jesus.  Jesus said to them, "Children, have you any fish?" They answered him, "No." He said to them, "Cast the net on the right side of the boat, and you will find some." So they cast it, and now they were not able to haul it in, for the quantity of fish. That disciple whom Jesus loved said to Peter, "It is the Lord!" When Simon Peter heard that it was the Lord, he put on his clothes, for he was stripped for work, and sprang into the sea.

But the other disciples came in the boat, dragging the net full of fish, for they were not far from the land, but about a hundred yards off.

When they got out on land, they saw a charcoal fire there, with fish lying on it, and bread. Jesus said to them, "Bring some of the fish that you have just caught." So Simon Peter went aboard and hauled the net ashore, full of large fish, a hundred and fifty-three of them; and although there were so many, the net was not torn.

Jesus said to them, "Come and have breakfast." Now none of the disciples dared ask him, "Who are you?" They knew it was the Lord. Jesus came and took the bread and gave it to them, and so with the fish. This was now the third time that Jesus was revealed to the disciples after he was raised from the dead.

When I turned 13 I wanted to be a pilot in the Irish Army Air Corps. With three or four classmates in O'Connell Schools, Dublin, run by the (Irish) Christian Brothers, I was enthralled by the exploits of Biggles, a fictitious character created by Captain W. E. Johns. Biggles started his career in the Royal Flying Corps in World War I and was still flying, in the Royal Air Force, during World War II.

When I discovered that you needed some proficiency in physics my interest in being a pilot waned but my desire to be a military officer was still there. But 'coming up from the rear' was a desire to be a missionary priest. By the time I was 14 I knew that that was what I wanted to be. 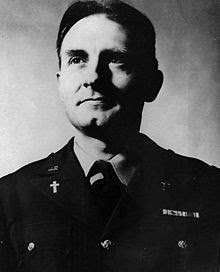 Around that time, or maybe when I was 15, I found a book in one of the branches of Dublin city's public libraries about a man who had combined being a priest and an army officer, Father Emil Kapaun of the Diocese of Wichita, Kansas, who served as an army chaplain in World War II and in the Korean War (1950 - 53). When his unit retreated after being attacked by Chinese soldiers Father Kapaun stayed behind with the wounded, knowing he would be captured. . I was truly inspired by the accounts of how he had helped so many soldiers, giving them hope, strengthening their faith, sharing his pipe with them, scrounging for food and medicines, ie, 'stealing' them. One of the veterans in the video above tells how Catholics, Protestants and Jews were all saying the rosary every night.

At the beginning of the video we hear the voice of Father Kapaun himself speaking of the choice we must make 'between being loyal to the true faith or of giving allegiance to something else'. His own choice led to his death in a North Korean prisoner of war camp, his last public act being a service at sunrise on 25 March 1951, Easter Sunday. One of those who carried him later to the camp 'hospital'from which no 'patient' ever returned alive, recounts in the video how he was blessing his captors.

The first time I visited Korea, towards the end of September 1971 on my way to the Philippines, I was very conscious of Fr Kapaun when I celebrated Mass in the chapel of the Columban house in Seoul.

Last Thursday, 11 April, nine days before the 97th anniversary of his birth, Fr Kapaun was  posthumously awarded the Medal of Honor, the USA's highest award for valour, President Obama giving the medal to the priest's nephew at the White House.

In 1993 Fr Kapaun was declared a 'Servant of God', the first step towards possible canonization, and on 29 June 2008 the cause for his sainthood was officially opened. The Diocese of Wichita has a website dedicated to this. In the gospel for this Sunday Jesus asks Peter three times, 'Do you love me?', adding 'more than these' the first time. When Peter professed his love each time Jesus told him to 'feed my lambs', 'feed my sheep'. His tending the flock was not to be a 'job' but something done joyfully and wholeheartedly out of his relationship with Jesus. Yet it was to lead to the cross, just as Father Kapaun's following of Jesus was to lead him to his death, which the Church may one day recognize as that of a martyr, like the death of St Martin I, who wasn't directly killed but whose harsh treatment led to his death and whom the Church honours on 13 April.

Fr Emil Joseph Kapaun is an outstanding example of one who allowed Jesus to ask him, 'do you love me?' and who answered 'Yes' with his very life, turning what was a man-made hell into a touch of heaven for the soldiers he was called to serve.

The Korean War began on 25 June 1950 and lasted till the ceasefire of 27 July 1953. Technically it has never ended and at this moment nobody is sure what North Korea is up to, having raised tensions considerably in recent weeks. Perhaps we can invoke the intercession of Father Kapaun for peace in the land where he is buried. This prayer is from the website dedicated to the cause of his canonization.

PRAYERLord Jesus, in the midst of the folly of war,your servant, Chaplain Emil Kapaun spent himself in total service to you on the battlefields andin the prison camps of Korea, until his death at the hands of his captors.We now ask you, Lord Jesus, if it be your will,to make known to all the world the holiness of Chaplain Kapaun and the glory of his complete sacrifice for you by signs of miracles and peace.In your name, Lord, we ask, for you are the source of peace, the strength of our service to others, and our final hope. Amen