'I am with you always . . .' Sunday Reflections. The Ascension; 7th Sunday of Easter Now the eleven disciples went to Galilee, to the mountain to which Jesus had directed them. When they saw him, they worshiped him; but some doubted. And Jesus came and said to them, “All authority in heaven and on earth has been given to me. Go therefore and make disciples of all nations, baptizing them in the name of the Father and of the Son and of the Holy Spirit,  and teaching them to obey everything that I have commanded you. And remember, I am with you always, to the end of the age.”
The readings above are used whether the Solemnity is celebrated on Ascension Thursday or on the following Sunday. They are used both at the Vigil Mass and at the Mass during the Day. The two Masses have a different set of prayers. Both fulfill the obligation of participating at Mass on a holyday of obligation, as Ascension Thursday is where the solemnity is observed on that day, and as every Sunday is.

After Jesus had spoken these words, he looked up to heaven and said, “Father, the hour has come; glorify your Son so that the Son may glorify you, since you have given him authority over all people, to give eternal life to all whom you have given him. And this is eternal life, that they may know you, the only true God, and Jesus Christ whom you have sent. I glorified you on earth by finishing the work that you gave me to do. So now, Father, glorify me in your own presence with the glory that I had in your presence before the world existed.

“I have made your name known to those whom you gave me from the world. They were yours, and you gave them to me, and they have kept your word. Now they know that everything you have given me is from you; for the words that you gave to me I have given to them, and they have received them and know in truth that I came from you; and they have believed that you sent me. I am asking on their behalf; I am not asking on behalf of the world, but on behalf of those whom you gave me, because they are yours. All mine are yours, and yours are mine; and I have been glorified in them. And now I am no longer in the world, but they are in the world, and I am coming to you. Holy Father, protect them in your name that you have given me, so that they may be one, as we are one. 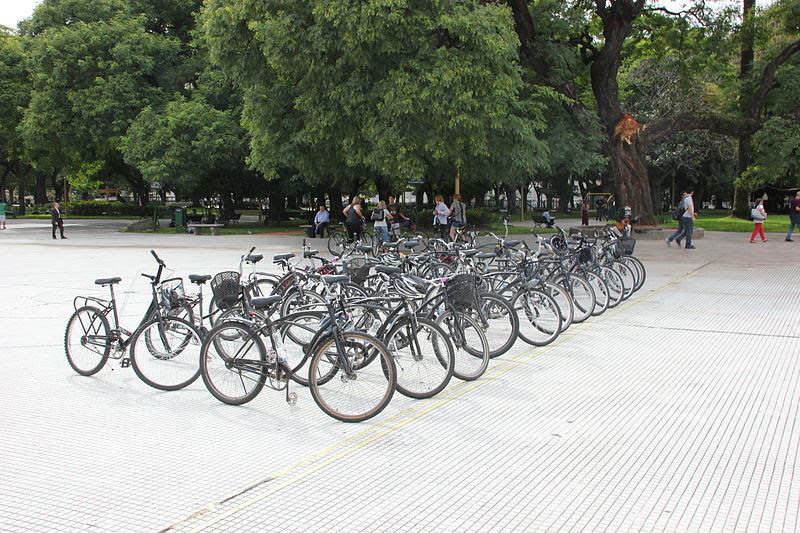 Bicycles in Buenos Aires [Wikipedia]
Early in the summer of 1953 when I was ten my father taught me how to ride a bicycle. In August of that year, when we were on holiday in Bray, south of Dublin, he taught me how to swim. I borrowed cry cousin Deirdre's bike, a small blue one and practised on Halliday Square, Dublin,, just below our street. It had a long enclosed garden in the centre where some local people grew vegetables, as I recall, and in my young mind was a kind of racing circuit.
Continue here.