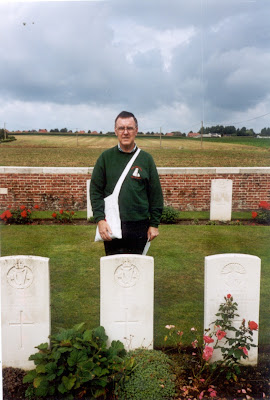 At the grave of my Great-uncle Lawrence Dowd in Potijze Chateau Cemetery, Ieper, Belgium, September 2001. Uncle Larry, my maternal grandmother's older half-brother, was killed on the Feast of the Transfiguration, 6 August 1917. I was the first relative to visit his grave, in September 2001. 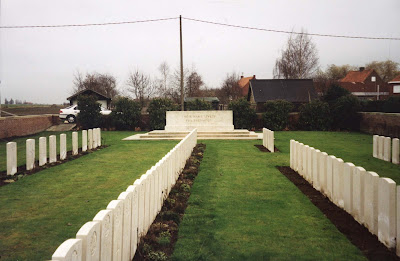 Potijze Chateau  Cemetery where my Corporal Lawrence Dowd is buried.
The Great War, World War I, began one hundred years ago this week and has been marked by ceremonies recalling that awful conflict. Here is something I wrote in 2003 and posted in 2008. There are some minor changes and corrections.
‘IN FLANDERS FIELDS’
In September 2001 I visited the grave of my great-uncle Lawrence Dowd who died in action near Ieper (Ypres), Belgium, on the Feast of the Transfiguration, 6 August 1917. This happened during the Third Battle of Ypres, often called simply 'Passchendaele', that lasted from July to November 1917. He’s buried in one of many war cemeteries in that part of Flanders. My mother’s Uncle Larry, from County Meath, enlisted in the Royal Dublin Fusiliers. To my deep regret, I never asked my grandmother about her brother, but my mother often told me of her father having heard the ‘banshee’ a day or two before the telegram arrived telling of Larry’s death.    Full post here.
:'In Flanders Fields' Flanders Fr William Doyle SJ Francis Lediwidge Ieper John McCrae Lawrence Dowd The Great War