'You shall love the Lord your God . . .you shall love your neighbor as yourself.' Sunday Reflections. 30th Sunday in Ordinary Time Year A St Matthew and the Angel,Vincenzo Campi,
San Francesco d'Assis, Pavia, Italy [Web Gallery
Readings (New American Bible: Philippines,
Readings (Jerusalem Bible: Australia, England & Wales, India [optional], Ireland, New Zealand, Pakistan, Scotland, South Africa)
Gospel Matthew 22:34-40 (New Revised Standard Version, Catholic Edition: Canada)
When the Pharisees heard that Jesus had silenced the Sadducees, they gathered together, and one of them, a lawyer, asked him a question to test him. “Teacher, which commandment in the law is the greatest?” He said to him, “‘You shall love the Lord your God with all your heart, and with all your soul, and with all your mind.’ This is the greatest and first commandment.  And a second is like it: ‘You shall love your neighbor as yourself.’ On these two commandments hang all the law and the prophets.”

In preparation for the visit of Pope Francis to the Philippines in January 2015 Luis Antonio Cardinal Tagle, Archbishop of Manila, reflects on today's gospel.
The first of the three videos in this series has the theme The Works of Mercy. In the second Cardinal Tagle looks at The Beatitudes. 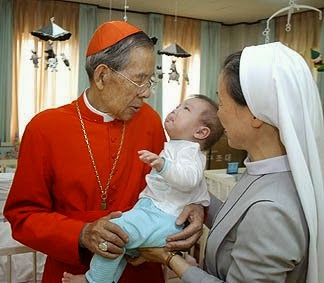 Stephen Cardinal Kim Sou-hwan, Archbishop of Seoul (1922 - 2009)
I'm in Korea at the moment, partly because of the ordination to the priesthood on 1 November of revered Lee Jehoon Augustine, a Columban who spent two years working in the Manila area as part of his preparation for the priesthood.
Yesterday, Friday, I went with two Columban priests, Fr Liam O'Keeffe, a classmate from County Clare, Ireland,
Full post here.
Cardinal Kim Columbans Korea Sunday Reflections