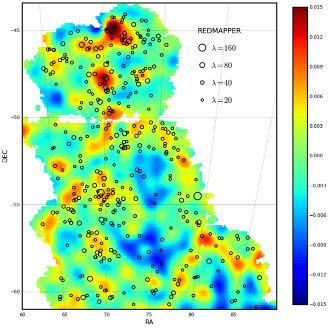 Dark matter and dark energy will probably be in the news — science news, anyway — quite a bit over the next few months. CERN's upcoming research, using the Large Hadron Collider (LHC), pretty much guarantees that. (April 10, 2015)

The Dark Energy Survey, an international team of scientists, gave a second-year report on their five-year project this Tuesday. They are mapping the universe, tracing the effects of dark matter and dark energy: or whatever is pulling — and apparently pushing — galaxies and galactic clusters into position.

Other scientists, studying galaxies about 1,400,000,000 light years away, collected and analyzed data that may help us understand dark matter....

...The universe, although not yet perfect, is a place of beauty and order. Since part of our job is taking care of this world, learning how the universe works and developing tools is not just 'allowed.' It's part of being human....