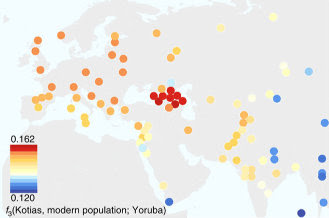 I stopped using the term "Caucasian" several years ago. I've discussed the "Anglo-Teutonic" race, Neanderthals, and getting a grip, before. (September 25, 2015; October 31, 2014)

Turns out, folks from the Caucasus moved into Europe at least once — along with many other folks....

We're still learning about humanity's family history. It's a lot more complicated than we thought....