Jesus took with him Peter and John and James, and went up on the mountain to pray. And while he was praying, the appearance of his face changed, and his clothes became dazzling white. Suddenly they saw two men, Moses and Elijah, talking to him. They appeared in glory and were speaking of his departure, which he was about to accomplish at Jerusalem. Now Peter and his companions were weighed down with sleep; but since they had stayed awake, they saw his glory and the two men who stood with him. Just as they were leaving him, Peter said to Jesus, “Master, it is good for us to be here; let us make three dwellings, one for you, one for Moses, and one for Elijah”—not knowing what he said. While he was saying this, a cloud came and overshadowed them; and they were terrified as they entered the cloud. Then from the cloud came a voice that said, “This is my Son, my Chosen; listen to him!” When the voice had spoken, Jesus was found alone. And they kept silent and in those days told no one any of the things they had seen. 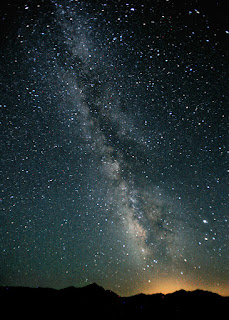 A View of the Milky Way

[The LORD] brought [Abram] outside and said, "Look toward heaven and count the stars, if you are able to count them." Then he said to him, "So shall your descendants be." ( From First Reading, Gen 15:5, NRSVCE)

By the mystery of this water and wine may we come to share in the divinity of Christ who humbled himself to share in our humanity.
The deacon or priest says these words quietly as he pours wine and a little water into the chalice during the Offertory of the Mass.

In today's gospel Jesus, who humbled himself to share in our humanity, allowed Peter, James and John to get a glimpse of his divinity. Moses and Elijah spoke of what Jesus was to accomplish at Jerusalem. That was not only his death but his Resurrection and glorification.

Jesus calls us to share in his Resurrection and glorification, to share in the divinity that is his.

We don't share in the Resurrection, glorification and divinity of Jesus Christ only after death but also, as Peter, James and John did in the Transfiguration, in this life when we experience the gift of God's love in events that can transform us here and now

My Australian fellow Columban, Fr Warren Kinne, who worked in Mindanao, Philippines, for many years and is now in China, tells the story of Xiao Ai, who was in her early days a 'non-person'. But through the love and care of strangers, Chinese and foreign, she now has possibilities open to her that she never could have imagined. And Father Warren, who has some Chinese ancestry, sees her story as encapsulating in some ways the meaning of Lent and Easter. Here's how he tells it.

It's taken from the January-February 2013 issue of MISYONonline.com, the Columban online magazine I edit in the Philippines.

Courage to live a Lent by Fr Warren Kinne

Before the great Feast of Easter when we celebrate the death and resurrection of Jesus, the Church goes through a period of preparation by prayer and fasting. We call this Lent. In the northern hemisphere, where Christianity started, it was celebrated in spring and slowly, throughout that time, the dead of winter burst forth into the luxuriance of new growth, signifying life and the resurrection.


Xiao Ai is a young friend of mine. She was left at the steps of a convent about 2004 or 2005 in a remote village of Shan Xi Province, China. She was born with clubbed feet and abandoned. Xiao was brought to Shanghai where a group of foreigners provided money and logistical support for multiple operations.

During that period she was taken in by a family who took great care of her and eventually wanted to adopt her as their own. However there were many hurdles to be overcome. Xiao Ai did not have any identification as the convent was not a registered orphanage and so was not in a position to register her. 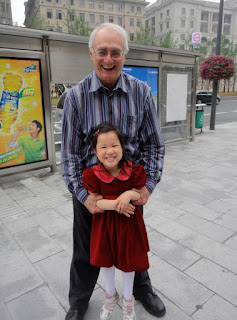 Indeed people could only guess at her actual birth date. She was really a ‘non-person’.
After years of effort Xiao Ai has had all her paperwork completed and she now has a Chinese passport that will allow her to travel with her adopted family to Singapore. What happiness followed the long and anxious wait where a wonderful outcome was hoped for rather than expected.