Singing through the Pain 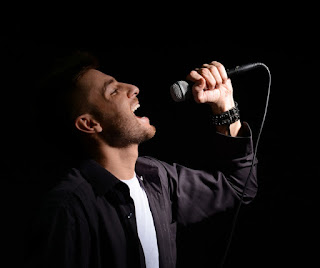 Last Mother’s Day we went to the 10:00 a.m. Mass at St. Jude’s in Allen, TX,  with my son Andrew and his family. We arrived early while the choir was practicing and sat in the third row behind their two reserved rows. Andrew prepared his French horn and joined the music practice.

When the practice was over, just before Mass started, I observed this young man come from the row of choir microphones and around the pews with an armful of pillows. He headed toward the pew in front of us where an elderly woman and a couple of young people were sitting. He motioned that he wanted to sit in that pew and they moved toward the aisle to allow him to move past them. He hesitated, said something to them and after a short conversation, they moved to another pew. He arranged his pillows in the pew and lay down on his back.
I turned to my daughter-in-law inquisitively and she told me about the man’s back problems and recent back surgery. His name was Patrick Underwood. He lay there until time to sing the processional, then painstakingly pulled himself to his feet by grasping the back of the pew in front of him and forcing his body erect. He had a booming voice and played the bongo drums during the Alleluia with a passion I had never seen—at least not at mass!

Read more of this Mother's Day Story on JoyAlive.net