Aging World with an aging heart by self centered culture.

In recent decades Europe, leader of modern secular culture, and other countries of the Asian continent have aged and the stress of their population control principles has already affected entire economies, after having swept the Christian social culture of Europe. The problem is now so serious that Governments have adressed the emergency, but with the same bureaucratic methods  used to solve other social problems: campaigns advertising and incentives so that couples have children. But it seems that these marketing efforts are not working and the answer and solution are, paradoxically, in the Christian culture that they spurned in the past.


Italy, Denmark and Taiwan are some of the countries who are in despair, along with New Zealand, which have used a slogan of "Let's mate, mate" to promote fatherhood. Even China has softened its policy of one child to improve its demographic base and Singapore has offered monetary, fiscal and services incentives that reach up to 90,000 Singapore dollars for each child up to the age of 13.Other countries like South Korea, in 2010, cut the electricity in the offices so that people went home early to “produce babies” tried to convince parents with posters like the following, from the negative effects of not having brothers. (1) 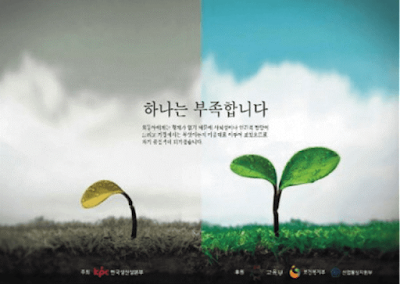 If the promotion is made and material support is given, why is it not working?


The reasons can be found at the core of the same campaigns and principles that were used decades ago to achieve the reduction of the population and that the Christian faith pointed as worrying and harmful for families.


Stuart Gietel-Basten, an Oxford Professor, explains several of thed reasons not to have children and warns they will be difficult to deal with just advertising campaigns. Among them, it is the logical economic uncertainty, the concern to keep a job. But he discovered other cultural and social reasons that will  be very difficult to reverse. Among these is the concern of women be able to combine work with motherhood and  the stress of the double-shift it represents, as well as many labour structures that discriminate pregnant women and the loss of the ability of people to live in large groups for most of them have grown up in families with a single brother. (2)


If we analize these reasons, we find that many of them have been caused by the same extreme individualistic, materialistic and environmentalist culture that was initially used to educate couples to have fewer children. This has already been absorbed by the last generations into a lifestyle focused on oneself.Other reasons which exhibit even more the soul of this culture are:


• effects on the physique of women and negative stereotype of pregnancy.


• Fear the reduction in sexual performance.


• Lack of social support structures (which before was the family).


• Reduction of the concept of pure professional development success.


• Devaluation of motherhood and superiority of the female productive labor.


• The delegitimation of motherhood as occupation and pleasure produced by the women. (3)


The Catholic faith has always insisted on the effects that this self centered culture would thus bring to the communities and to the whole world. An effect of aging not only by age  but by the lack of hope that renews the possibilities of the future.


Since the encyclical "Humanae Vitae" of blessed Pope Paul VI to the Pope Francisco the Church has underlined the essential ideas that have to be protected to preserve not only population health in the world, but also the personal, emotional, and social health of all humans:


"The joy of the children makes throb the hearts of parents and reopens the future. Children are the joy of family and society. They are not a problem of reproductive biology, or one of many ways to perform. And they are much less a possession of parents." (4)