Tides and Our Moon’s Origin 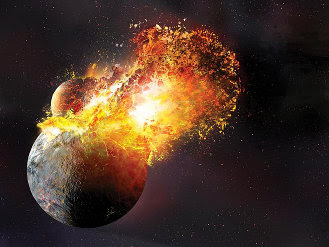 Scientists have been wondering how our moon formed, and why its orbit isn't over Earth's equator.

It looks like our moon formed after something about the size of Mars hit Earth, roughly 4,500,000,000 years back.

But the giant-impact hypothesis didn't explain why our moon orbits Earth only five degrees away from Earth's orbital plane. The math had said that our moon would be orbiting pretty much over Earth's equator....

...God is Large and In Charge


I occasionally wonder if I should keep explaining why reality doesn't offend me, and why facts don’t threaten my faith....