By Susanne Timpani - April 11, 2017
And when they had crucified him, they divided his garments among them by casting lots; then they sat down and kept watch over him there.  And over his head they put the charge against him, which read: “This is Jesus the King of the Jews”.

Then two robbers were crucified with him, one on the right hand and one on the left.  And those who passed by derided him, wagging their heads and saying:
“You who would destroy the temple and build it in three days, save yourself!  If you are the Son of God, come down from the Cross”.

So also the chief priests with the scribes and elders mocked him, saying:
“He saved others; he cannot save himself.  He is the King of Israel; let him come down now from the Cross and we will believe in him”. Matthew 27:35-42 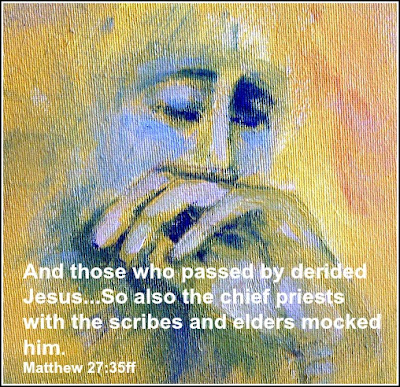 As horrific as this scene is, don’t we do it too in some ways? Whenever we wonder why Jesus allows suffering, loneliness, starvation, aren’t we expecting Him to come down and save us, prove to us that He is there? Read on: https://susannetimpani.blogspot.com.au/