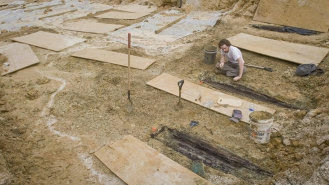 Variations on "dead men tell no tales" go back at least to 1560 or thereabouts in my language. The idea is much older.1

As advice goes, it's arguably flawed. Folks who are dead aren't chatty, but their bodies occasionally pop up at inopportune times.

I'll be talking about unmarked and unremembered graves, insane asylums, and similarly-uncheerful things. It's not all bad news, though.