Gospel Matthew 22:15-21 (New Revised  Standard Version, Anglicised CatholicEdition)
Then the Pharisees went and plotted to entrap Jesus in what he said. So they sent their disciples to him, along with the Herodians, saying, ‘Teacher, we know that you are sincere, and teach the way of God in accordance with truth, and show deference to no one; for you do not regard people with partiality. Tell us, then, what you think. Is it lawful to pay taxes to the emperor, or not?’ But Jesus, aware of their malice, said, ‘Why are you putting me to the test, you hypocrites? Show me the coin used for the tax.’ And they brought him a denarius. Then he said to them, ‘Whose head is this, and whose title?’ They answered, ‘The emperor’s.’ Then he said to them, ‘Give therefore to the emperor the things that are the emperor’s, and to God the things that are God’s. 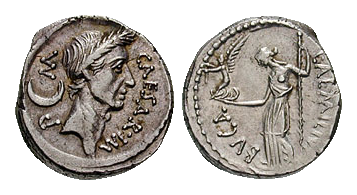 A denarius from 44 BC showing the head of Julius Caesar and the goddess Venus [Wikipedia]
In the time of Jesus a denarius was a day's wage for an ordinary working man.

I spent three months in the latter part of 1982 working in a hospital in Minneapolis as a chaplain. I was one of seven doing a 'quarter' of Clinical Pastoral Education. One day I had to go to a bank and got chatting with an employee at the information desk. When he heard I was based in the Philippines he told me that in the previous elections in the USA he had considered, among other things, what impact his vote would have on the lives of Filipinos and others outside the USA.

I was very struck by his attitude. We never got into partisan politics nor did we discuss religion. The man was almost certainly a Christian, probably a Lutheran if he was from Minneapolis or a Catholic if from St Paul, the other 'Twin City'. I saw in him a person reflecting the teaching of Vatican II.