What Christians Can Learn From Malcolm X 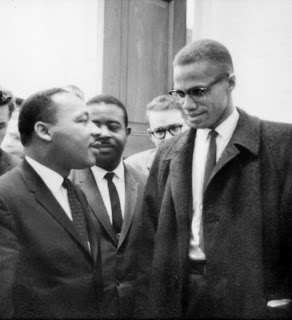 I have been reading The Autobiography of Malcolm X and I am very impressed with the man. I was interested in reading it after someone mentioned how reading changed his life (I am all about promoting literacy and education.) I learned a lot about how things were during his life and also how things got to be the way they are now. It seems to me that a lot has improved since his time, but a lot is still very much the same. His message to his black brothers was for them to love and respect themselves, do for themselves, and demand justice for themselves–this is hard for me to disagree with. Malcolm is still thought of today as a divisive and angry figure, unlike the inclusive and inspiring Martin Luther King, but there are many things we can learn from the life of Malcolm X.
1. Through self-discipline, Malcolm found freedom. While in prison, his family was trying to get him to follow the teachings of Elijah Muhammad–they started by telling him to give up pork and cigarettes and that they would help him to get out of prison. He began to decline the pork as it was passed around and also the cigarettes. I believe this was the turning point where he began to see that he was something other than a victim of injustice with no power over his life–he began to see that even in prison, he could make choices for himself, giving up the sensual and temporary pleasure for something greater. As Christians, we practice this same discipline during Lent and Advent, and (we ought to be) Fridays as well. Denying ourselves some worldly goods can strengthen us for the spiritual fights we must face.
2.  Read more...