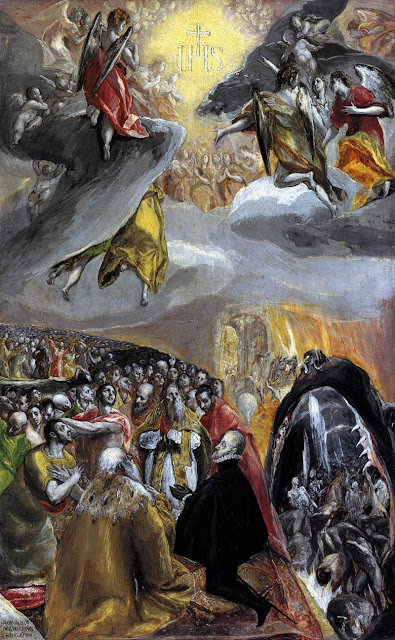 The Adoration of the Name of Jesus, El Greco [Web Gallery of Art]

Jesus said to his disciples:
‘But in those days, after that suffering,
the sun will be darkened,
and the moon will not give its light,
and the stars will be falling from heaven,    and the powers in the heavens will be shaken.
Then they will see “the Son of Man coming in clouds” with great power and glory. Then he will send out the angels, and gather his elect from the four winds, from the ends of the earth to the ends of heaven.
‘From the fig tree learn its lesson: as soon as its branch becomes tender and puts forth its leaves, you know that summer is near. So also, when you see these things taking place, you know that he is near, at the very gates. Truly I tell you, this generation will not pass away until all these things have taken place. Heaven and earth will pass away, but my words will not pass away.
‘But about that day or hour no one knows, neither the angels in heaven, nor the Son, but only the Father.' 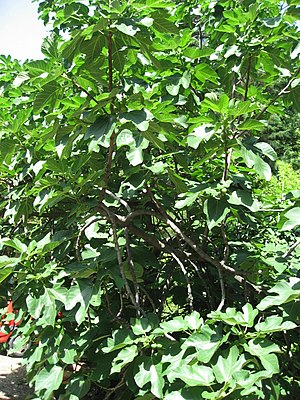 Fig tree [Wikipedia]
As I write this the worst wildfire in California history is still raging, with more than fifty known deaths and hundreds of people unaccounted for. A town named Paradise has been totally destroyed. Last night a friend who is a father of seven young children, the eldest 13, told me of the sudden death from a heart attack of his niece's husband, aged 33, leaving a young widow, and four small children without a father. A three-year civil war has left Yemen on the brink of what may become the 'world's worst famine in 100 years' that could leave 13 million people at the risk of starvation.

Last Sunday much of the world held ceremonies to mark the centennial of the Armistice that ended the Great War, later known as World War One (1914-18). This 'war to end all wars' resulted in around 16 million deaths, about six million of those civilians. But the centennial ceremonies offered hope as former enemies joined together to remember and pray for the dead and looked to building a future without war.

The sudden death of a young husband/father is not something that can be foreseen. In the case of the young father of four who died yesterday there is a family medical history. But too often such deaths are the result of one person deciding to kill another.

We often gloss over the reality of sin and the consequences of our decision. But the First Reading speaks plainly: Many of those who sleep in the dust of the earth shall awake, some to everlasting life, and some to shame and everlasting contempt (Daniel 12:2).

We are drawing to the end of the current liturgical year in which the Church has focused on the Gospel of St Mark. The first words that Jesus speaks in this gospel are: The time is fulfilled, and the kingdom of God has come near; repent, and believe in the good news.

Jesus is emphasising the need for repentance. He warns us in today's gospel, But about that day or hour no one knows, neither the angels in heaven, nor the Son, but only the Father.

Jesus has given us the gift of a particular way to obtain forgiveness for our sins, the sacrament of penance and reconciliation, often referred to as 'confession'. The Catechism of the Catholic Church No 1422 reads:Those who approach the sacrament of Penance obtain pardon from God's mercy for the offense committed against him, and are, at the same time, reconciled with the Church which they have wounded by their sins and which by charity, by example, and by prayer labours for their conversion.

Today's readings call us to reflect on death, particularly our own, not in a morbid way but from a belief that God is the foundation of hope. Pope Benedict writes in his encyclical letter Spe Salvi No 48, in the context of our relationship with those who have died, Now a further question arises: if 'Purgatory' is simply purification through fire in the encounter with the Lord, Judge and Saviour, how can a third person intervene, even if he or she is particularly close to the other? When we ask such a question, we should recall that no man is an island, entire of itself. Our lives are involved with one another, through innumerable interactions they are linked together. No one lives alone. No one sins alone. No one is saved alone. The lives of others continually spill over into mine: in what I think, say, do and achieve. And conversely, my life spills over into that of others: for better and for worse. So my prayer for another is not something extraneous to that person, something external, not even after death.

This passage acknowledges the effects of our sins on others but also gives us hope. Benedict quotes the English poet John Donne: No man is an island, entire of itself.

Each time when someone we know dies, whether naturally after a long and fruitful life or tragically while still young, that is a grace from God for us to reflect on the purpose of our life. The Catechism of the Catholic Church No 1023 says, Those who die in God's grace and friendship and are perfectly purified live for ever with Christ. They are like God for ever, for they 'see him as he is,' face to face.

That is God's will for each of us but it is possible to reject that loving will. If we choose not to ask God's forgiveness for mortal sins we will have opted for shame and everlasting contempt (Daniel 12:2).

May each of us, with God's grace, choose eternal life, especially by asking God's forgiveness regularly in the sacrament of reconciliation.