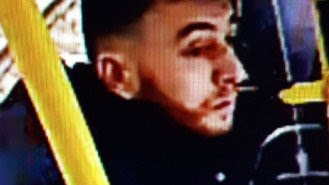 Three folks on a streetcar in Utrecht, Netherlands, didn't get off. Not alive.

Someone, maybe the man in that picture, killed them.

He's been caught, apparently no more bodies have been found, and that's as much as I know so far. know for sure, anyway.

This incident grabbed my attention, partly because it's been happening in the Netherlands: one of my wife's ancestral homelands. Instead of trying to focus on something else, I decided to share what I've been reading — and some odd speculation.