‘Neither do I condemn you.' Sunday Reflections, 5th Sunday of Lent, Year C

From The Gospel of John (2003) directed by Philip Saville

Jesus went to the Mount of Olives. Early in the morning he came again to the temple. All the people came to him and he sat down and began to teach them. The scribes and the Pharisees brought a woman who had been caught in adultery; and making her stand before all of them, they said to him, ‘Teacher, this woman was caught in the very act of committing adultery. Now in the law Moses commanded us to stone such women. Now what do you say?’ They said this to test him, so that they might have some charge to bring against him. Jesus bent down and wrote with his finger on the ground. When they kept on questioning him, he straightened up and said to them, ‘Let anyone among you who is without sin be the first to throw a stone at her.’ And once again he bent down and wrote on the ground. When they heard it, they went away, one by one, beginning with the elders; and Jesus was left alone with the woman standing before him. Jesus straightened up and said to her, ‘Woman, where are they? Has no one condemned you?’ She said, ‘No one, sir.’ And Jesus said, ‘Neither do I condemn you. Go your way, and from now on do not sin again.’

In the summer of 1982 I did a number of brief supplies in parishes in one of the western states in the USA. In one parish, where I stayed only from Saturday till Monday morning, the Sunday gospel was one showing the mercy of Jesus. I forget which one, but know it wasn't today's. In my homily I emphasised God's love for us as sinners and how he wants to welcome us back when we turn away from him, partly or fully, by sinning.

The following morning I found an anonymous note that had been shoved under the front door of the priest's house. The style was that of a teenage girl. But the message was one for which I thanked God.

The writer said that for years she had hated God, thinking that God hated her. But whatever was in the gospel that Sunday and whatever I said in my homily had touched her deeply, making her aware of God's unconditional love for her precisely as a sinner, a love that led her to let go of the hatred she had been carrying. 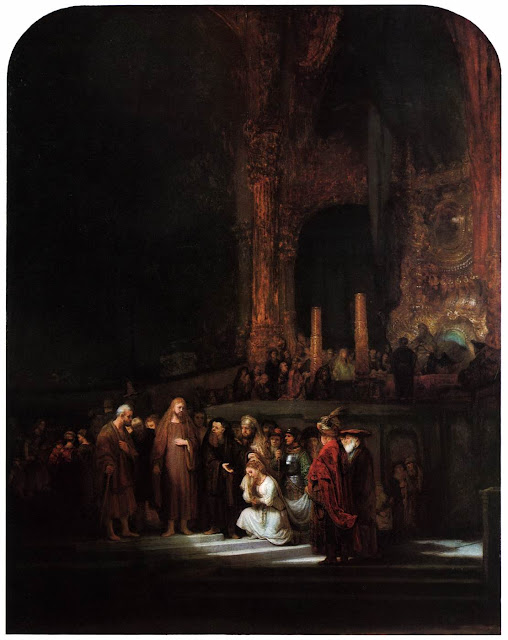 Today's gospel shows so clearly the profound, merciful love that Jesus has for the sinner. We tend to focus on his mercy for the woman taken in adultery. She is indeed the main focal point. But we also see the merciful love of Jesus for those who had accused her. Jesus often spoke harshly to and about hypocrites. But on this occasion he brings the men who had wanted to execute the woman to reflect on their own sinfulness. Let anyone among you who is without sin be the first to throw a stone at her.

And the men did respond. When they heard it, they went away, one by one, beginning with the elders.

Today's gospel reflects that of last Sunday, the parable of the Prodigal Son. The older son couldn't see beyond the great sins of his younger brother and failed even to see his father's love shown each day. But the father gently points out, Son, you are always with me, and all that is mine is yours.

The men in the gospel could see only the sin of the woman. And she had committed a grave sin. Adultery is never a 'peccadillo', a 'little sin'. It is among other things a sin of injustice and causes grief to the other spouse and to their children, as I know only too well from listening to young people on retreats over the years.

And Jesus in this instance is judgmental in that sense. He first asks the woman, Has no one condemned you? He then goes on to say, Neither do I condemn you. Go your way, and from now on do not sin again.

Jesus judges the woman - but doesn't condemn her. He acknowledges her sin - but sends her away forgiven.

Jesus has given us through the Church a powerful way of experiencing what the woman in today's gospel did. It is the Sacrament of Reconciliation/Confession/Penance. We're not usually dragged to the confessional by people condemning us. But we acknowledge our sins while acknowledging God's mercy.

Among other things, 'The whole power of the sacrament of Penance consists in restoring us to God's grace and joining us with him in an intimate friendship.' Reconciliation with God is thus the purpose and effect of this sacrament. For those who receive the sacrament of Penance with contrite heart and religious disposition, reconciliation 'is usually followed by peace and serenity of conscience with strong spiritual consolation.' Indeed the sacrament of Reconciliation with God brings about a true 'spiritual resurrection,' restoration of the dignity and blessings of the life of the children of God, of which the most precious is friendship with God. (Catechism of the Catholic Church, No 1468).

Let us restore to the center – and not only in this Jubilee Year – the Sacrament of Reconciliation, a true space of the Spirit in which all, confessors and penitents, are able to experience the only definitive and faithful love, that of God for each one of His children, a love that never disappoints. St Leopold Mandic reiterated that God's mercy outstrips all our expectations. He used to say to those who suffered, 'We have in Heaven the heart of a mother. The Virgin, our Mother, who at the foot of the Cross experienced all the suffering possible for a human creature, understands our hardships and consoles us'. May Mary, refuge of sinners and Mother of Mercy, always guide and sustain the fundamental ministry of Reconciliation. (Pope Francis, 4 March 2016.)

Nemo te condemnavit, mulier? Nemo, Domine.
Has no one condemned you, woman? No one, Lord.
Nec ego condemnabo: iam amplius noli peccavi.
Neither shall I condemn you. From now on, sin no more.
Confession Lent Philip Saville Pope Francis Rembrandt Sunday Reflections