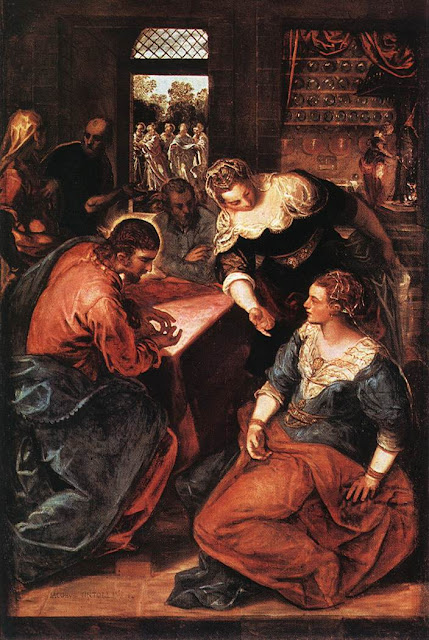 Christ in the House of Marth and Mary, Tintoretto [Web Gallery of Art]

Now as they went on their way, Jesus entered a certain village, where a woman named Martha welcomed him into her home. She had a sister named Mary, who sat at the Lord’s feet and listened to what he was saying. But Martha was distracted by her many tasks; so she came to him and asked, ‘Lord, do you not care that my sister has left me to do all the work by myself? Tell her then to help me.’ But the Lord answered her, ‘Martha, Martha, you are worried and distracted by many things; there is need of only one thing. Mary has chosen the better part, which will not be taken away from her.’

Perhaps the poorest man I've met in my life was Billy Smith. Despite his name, he was a Filipino, though as far as we Columban priests knew his father was an American. He was known to all the Columbans in northern Mindanao where in the 1970s we had many parishes, now staffed by Filipino diocesan priests. Billy would do his rounds of the parishes over a period of months and in each would get some food, some clothing, a little money and a place to sleep. He was tall and thin and in his latter years was going blind. He had a number of illnesses. He carried a sturdy staff. Sometimes children would make fun of him and even throw stones at him.

One afternoon more than 35 years ago in a place where I had been parish priest for a couple of months, the last Columban to serve in that role, but was in charge of a spiritual pastoral formation year for seminarians from five dioceses, I heard the 'clump, clump, clump' of heavy boots coming up the stairs to the living quarters. It was Billy. At the time I had a visitor, a young friend named Patricia who was in Grade 5. She never knew her father as he had died when she was an infant. She 'adopted' me as a father and called me 'Tatay' (Dad) and often dropped by after class before heading home. (She is now a widowed grandmother and still calls me 'Tatay'.) The family lived in a small house built on stilts that looked as if it might fall over at any minute. Her mother managed to make a living.

When Patricia saw Billy she immediately went over to him, took him by the hand, sat him down at the table and brought him something to eat and drink. I doubt if Billy had ever received such service in his life. My young friend was unaware that I was taking all of this in.

Patricia had little in life and Billy had even less. But the young girl showed respect, kindness and hospitality to this man of the roads. She did this spontaneously, from the heart. When I told her about this incident years later she couldn't remember it.

The story in the First Reading of Abraham's welcome to the three strangers and the story of the welcome Martha and Mary to Jesus in the Gospel show us how blessed we may be by hospitality. Abraham didn't know that the strangers were visitors from God, who blessed him and Sarah, childless and well beyond the normal age for having children, with a son, Isaac, within the year. It is through Isaac that we can refer to 'Abraham, our father in faith' in Eucharistic Prayer I (The Roman Canon).

God blessed Billy through the hospitality of Patricia, a child, and he gave me a lifelong blessing through that incident.

Very often what a visitor looks forward to is something to eat and drink. And in the Scriptures when it gives us stories of hospitality such as in the First Reading, there is more than enough. Vincenzo Campi's painting below emphasises the extent of Martha's hospitality and the amount of work that faces her. We can understand her frustration with her sister Mary. The painting also reflects the boundless generosity of God.

However, there are times when the hospitality needed is simply someone to listen. From what we read about Martha, Mary and their brother Lazarus in the gospels of St Luke and St John it would seem that Jesus felt very much at home with them and quite possibly had many meals with them. But on this occasion he simply wants the ear of Mary and Martha. Mary senses this.

There is need of only one thing, Jesus tells Martha. That, basically, is to know what God wants from us at a particular time and then to do that. In the last chapter of St John's Gospel Jesus is telling us the same thing in his conversation with St Peter when he asks him three times 'Do you love me?' When Peter says 'Yes' on each occasion Jesus tells him, 'feed my lambs, feed my sheep'. But the basic question is Do you love me?

There is need of only one thing.