'The Church's mission is to offer the Word: a word that heals, liberates and reconciles.' Sunday Reflections, 30th Sunday in Ordinary Time, Year C

Jesus also told this parable to some who trusted in themselves that they were righteous and regarded others with contempt: ‘Two men went up to the temple to pray, one a Pharisee and the other a tax-collector. The Pharisee, standing by himself, was praying thus, “God, I thank you that I am not like other people: thieves, rogues, adulterers, or even like this tax-collector. I fast twice a week; I give a tenth of all my income.” But the tax-collector, standing far off, would not even look up to heaven, but was beating his breast and saying, “God, be merciful to me, a sinner!” I tell you, this man went down to his home justified rather than the other; for all who exalt themselves will be humbled, but all who humble themselves will be exalted.’ 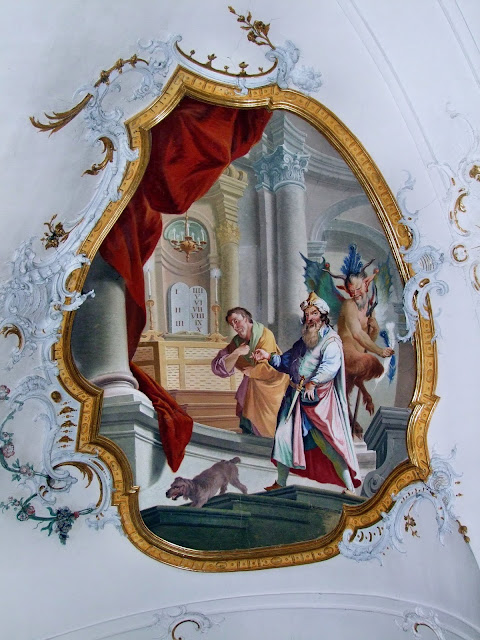 The Pharisee and the Publican

I remember when I was around 14 one of my father's fellow foremen on a building (construction) site came to visit us one evening. I'll call him Tom. My father went to Mass every morning, something he did until the day he died. At the time I was trying to emulate him. During the course of the evening Tom mentioned that he 'religiously received Holy Communion twice a year, at Christmas and at Easter'.

Some days later I remarked somewhat disapprovingly to my parents that Tom went to Holy Communion only twice a year. Both of them spoke to me very sharply and I realised that I was out of line, something like the Pharisee in today's gospel. And I did indeed feel a chastening sense of shame, something I still feel whenever I recall that moment.

Tom was an honest, hardworking family man, a man of faith who was still following the custom that prevailed until St Pius X (1903-1914) encouraged frequent Holy Communion. St Thérèse of Lisieux, who died six years before the election of that pope, wrote with gratitude in her Story of a Soul about the occasions when her confessor allowed her to go to Holy Communion. She understood what a great gift receiving the Lord in Holy Communion was. I wonder if most of us today have that same understanding. Indeed, surveys indicate that many Catholics don't believe that they are receiving the 'Body, Blood, Soul and Divinity' of the Risen Lord, as people of my generation learned from the catechism.

What blocked the Pharisee from receiving God's blessing, from going down to his home justified wasn't his telling God the good things he had done - St Paul doesn't hesitate to say to Timothy in today's Second Reading,  I have fought the good fight, I have finished the race, I have kept the faith (2Timothy 4:7) - but his self-righteous contempt for others whose inner struggles he seemed to be totally unaware of.

However, from my early days as a priest I have often thought that this parable should be slightly changed, with the tax-collector saying, God, I thank you that I am not like other people: thieves, rogues, adulterers, or even like this Pharisee. I don't think I've ever heard anyone condemning a sinner who has acknowledged his sins. But many times I've heard or read about individuals giving as an excuse for not going to Mass or even leaving the Church that there are 'too many hypocrites' there. 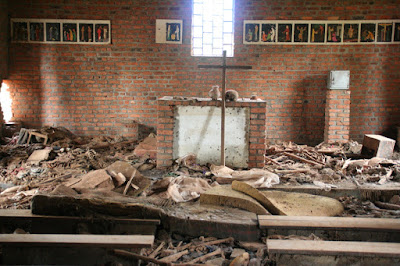 Over 5,000 people seeking refuge here were killed by grenade, machete, rifle, or burnt alive during the Rwandan Genocide in 1994.

A religious sister from Rwanda, Sr Genevieve Umawariya, speaking during the Synod on Africa held in Rome in 2009, the theme of which was The Church in Africa at the Service of Reconciliation, Justice and Peace, spoke of an incident that parallels today's gospel. Here is what she said:

I am a survivor of the Tutsi genocide in Rwanda 1994.

A large part of my family was killed while in our parish church. The sight of this building used to fill me with horror and turned my stomach, just like the encounter with the prisoners filled me with disgust and rage.

It is in this mental state that something happened that would change my life and my relationships.

On August 27th 1997 at 1 p.m., a group from the Catholic association of the 'Ladies of Divine Mercy' led me to two prisons in the region of Kibuye, my birthplace. They went to prepare the prisoners for the Jubilee of 2000. They said: 'If you have killed, you commit yourself to ask for forgiveness from the surviving victim, that way you can help him free himself of the burden/weight of vengeance, hatred and rancor. If you are a victim, you commit yourself to offer forgiveness to those who harmed you and thus you free them from the weight of their crime and the evil that is in them'.

This message had an unexpected effect for me and in me . . .

After that, one of the prisoners rose in tears, fell to his knees before me, loudly begging: 'Mercy'. I was petrified in recognizing a family friend who had grown up and shared everything with us.

He admitted having killed my father and told me the details of the death of my family. A feeling of pity and compassion invaded me: I picked him up, embraced him and told him in a tearful voice: 'You are and always will be my brother'.

Then I felt a huge weight lift away from me . . . I had found internal peace and I thanked the person I was holding in my arms.

To my great surprise, I heard him cry out: 'Justice can do its work and condemn me to death, now I am free!'

I also wanted to cry out to who wanted to hear: 'Come see what freed me, you too can find internal peace'.

From that moment on, my mission was to travel kilometers to bring mail to the prisoners asking for forgiveness from the survivors. Thus 500 letters were distributed; and I brought back mail with the answers of the survivors to the prisoners who had become my friends and my brothers . . . This allowed for meetings between the executioners and the victims . . .

From this experience, I deduce that reconciliation is not so much wanting to bring together two persons or two groups in conflict. It is rather the re-establishment of each in love and allowing internal healing which leads to mutual liberation.

And here is where the importance of the Church lies in our countries, since her mission is to offer the Word: a word that heals, liberates and reconciles.

Pope Francis echoes this last sentence of Sr Genevieve in his message World Mission Day 2016: Mercy finds its most noble and complete expression in the Incarnate Word. Jesus reveals the face of the Father who is rich in mercy.

Mother of the Word, Kibeho, Rwanda

Jesus speaks of God's mercy. In the video at the top we see a tax collector who understands exactly what Jesus is saying through his parable. Pope Francis has spoken about God's mercy and about the sacrament of confession many times.

The man who killed Sister Genevieve's father experienced God's mercy through her as she did through him. Each was freed of the very different but related burdens that they carried. And the man had no more fear of whatever punishment he might receive for his crime. Like the tax-collector in the gospel, he made no excuses. He simply asked for mercy.

The tax-collector (publican) in the parable, Sr Genevieve Umawariya and the man who had killed her father experienced the truth of the First Beatitude (Matthew 5:3) usually translated into English as Blessed are the poor in spirit: for theirs is the kingdom of heaven. For years I never quite understood what this meant until I read the translation in the New English Bible: How blest are those who know their need of God; the kingdom of Heaven is theirs.

May each of us, like the publican, like Sr Genevieve, like the man she forgave and who accepted her forgiveness, know our need of God and of his mercy.