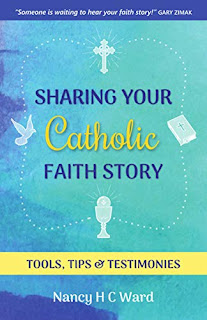 Sharing Your Catholic Faith Story is a compilation of 30 conversion stories written by Catholic authors. Some of the authors are “cradle Catholics” like me, while other authors found their way to the Catholic Church after a long, and sometimes winding journey. Yet, the variety of experiences all point to one thing: a love for Christ and His One, Holy, Catholic and Apostolic Church.
As a Rite of Christian Initiation for Adults (RCIA) Coordinator, it is my responsibility to bring souls into full Communion with the Catholic Church. I walk with them on their journey. So, my heart was touched to read some of the stories in this book. For example, Cynthia Gill Bates writes of her conversion from Mormonism to Catholicism.  She came to realize that when faith is lost, in a human being like Joseph Smith, who founded Mormonism, faith in that religion goes with it. She drives it home when she writes:
There are only two possible options: either Joseph Smith told the truth, or Joseph Smith lied. Either Joseph Smith was visited by God the Father and Jesus Christ, or he was not. Either the Book of Mormon is what it claims to be, or it is not. Period. (p. 105)
Now, it took two tries at the RCIA process, but Cynthia Gill Bates entered into full communion with the Catholic Church on Easter Sunday 2006. What brought her to the point of conversion? She wanted to receive the Eucharist. Her heart pointed toward that love for Christ and His Church.
Read more...
book review Catholic Nancy H C Ward