'Yes, Lord, but even the dogs eat the crumbs that fall from their masters' tables.' Sunday Reflections, 20th Sunday in Ordinary Time, Year A. The Assumption 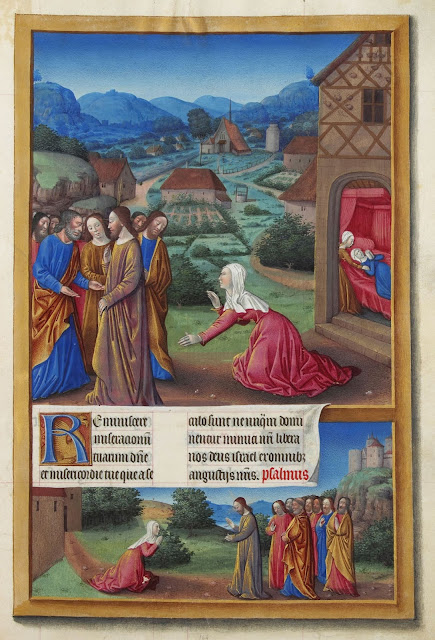 The Solemnity of the Assumption, 15 August, is a Holy Day of Obligation in Aotearoa New Zealand, England & Wales, Ireland, Scotland, USA. However, this year it is not a Holy Day of Obligation in the USA. In Aotearoa New Zealand, in England & Wales and in Scotland when 15 August falls on Saturday or Monday the Assumption is celebrated on Sunday, this year 16 August.

Jesus left that place and went away to the district of Tyre and Sidon.  Just then a Canaanite woman from that region came out and started shouting, ‘Have mercy on me, Lord, Son of David; my daughter is tormented by a demon.’ But he did not answer her at all. And his disciples came and urged him, saying, ‘Send her away, for she keeps shouting after us.’ He answered, ‘I was sent only to the lost sheep of the house of Israel.’ But she came and knelt before him, saying, ‘Lord, help me.’ He answered, ‘It is not fair to take the children’s food and throw it to the dogs.’ She said, ‘Yes, Lord, yet even the dogs eat the crumbs that fall from their masters’ table.’ Then Jesus answered her, ‘Woman, great is your faith! Let it be done for you as you wish.’ And her daughter was healed instantly. 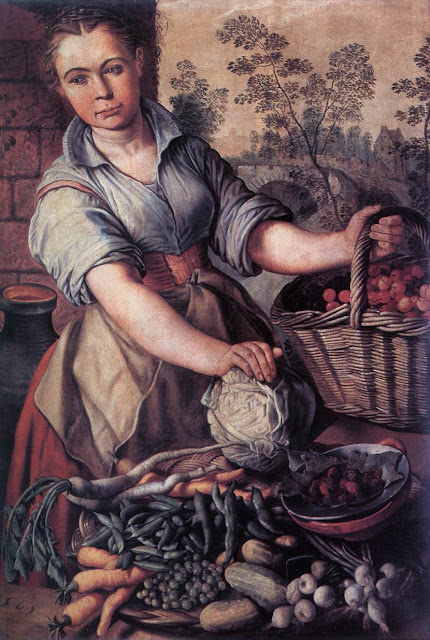 My late mother, whose name was Mary, loved to bargain, when buying clothes and when buying fruit and vegetables. She usually bought the latter at the store of a woman named Chrissie Caffrey, whose sister Maggie had a similar store across the road in Stoneybatter, then just a short street but now the name of the district in Dublin where I grew up. There were usually a few cats around but the vegetables and fruit on sale were fresh. Sometimes as a child, listening to my mother, I would think that she was insulting Chrissie the way she spoke to her. But they both would end up happy, my mother having got a bargain - or thinking that she had - and Chrissie having got a sale.

What my mother and Chrissie did a couple of times a week was a form of banter with a serious purpose. My mother wasn't insulting Chrissie; she was simply looking for a good price. Chrissie didn't take any offence at my mother's words, gave as good as she got - and sold her produce.

One commentary I read on this gospel suggests that Jesus and the Canaanite woman were engaged in something similar to Chrissie and my mother, a form of banter, but with a serious purpose. The words of Jesus comparing the Canaanites, non-Jews, to dogs were insulting at their face value. But the woman didn't take offence, She wanted her daughter healed and that's all that mattered to her. She probably hadn't been among those who heard Jesus' Sermon on the Mount when he said, among many other things, Ask, and it will be given to you; search, and you will find; knock, and the door will be opened for you (Mt 7:7). But clearly she had heard something about Jesus, of his love for the poor, for the sick, for the tormented. Because she persisted, giving as good as she got: Yes, Lord, but even the dogs eat the crumbs that fall from their masters' tables. She then heard the astounding words of Jesus, Woman, great is your faith! Let it be done for you as you wish.

It wasn't the first time Jesus responded to a non-Jew and remarked on that person's faith. Before we receive Holy Communion we pray the words of the Roman centurion who had come to Jesus with a similar plea to that of the Canaanite woman, not on behalf of his daughter but of his servant, 'Lord, I am not worthy . . .'
For everyone who asks receives, and everyone who searches finds, and for everyone who knocks, the door will be opened (Mt 7:8). 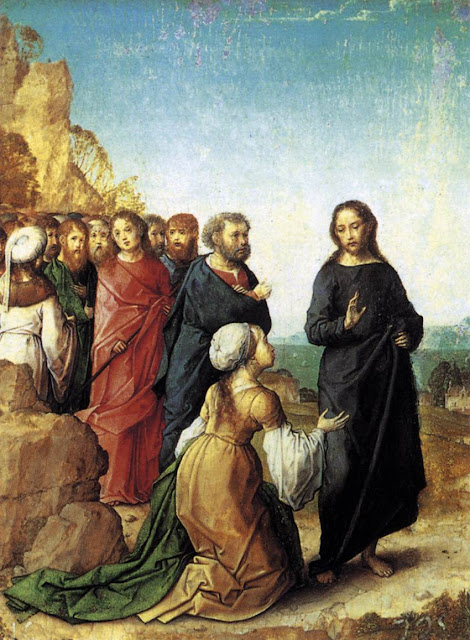 There is something very down-to-earth about the meeting of Jesus and the Canaanite woman. The Assumption too is a down-to-earth celebration. Pope Benedict reminds us: The Solemnity of the Assumption, so dear to popular tradition, serves as a useful occasion for all believers to meditate on the true sense and value of human existence in view of eternity.

Dear brothers and sisters, Heaven is our final dwelling place; from there, Mary encourages us by her example to welcome God's will, so as not to allow ourselves to be seduced by the deceptive attraction to what is transitory and fleeting, and not to give in to the temptations of selfishness and evil which extinguish the joy of life in the heart.

Part of the humanity of Jesus, God who became Man in the womb of the Virgin Mary, and of Mary herself is their Jewishness. They remain Jewish for all eternity.

Oskar Schindler, a German industrialist, and his wife Emilie saved the lives of more than a thousand Jewish refugees, most of them from Poland, from the Holocaust during World War II when the Nazis tried to eliminate the people from whom Jesus and Mary sprung. Each face in this beautiful video is an image of God and a reminder of the dignity of our humanity and of God's desire for us, expressed in the words at the top of this blog: Since we are travellers and pilgrims in the world, let us ever ponder on the end of the road, that is of our life, for the end of our roadway is our home (St Columban, 8th sermon).

Solemnity of the Assumption 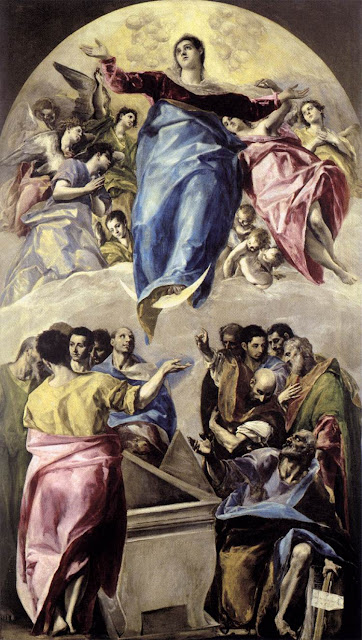 The Assumption of the Virgin
El Greco [Web Gallery of Art]

In those days Mary set out and went with haste to a Judean town in the hill country, where she entered the house of Zechariah and greeted Elizabeth. When Elizabeth heard Mary’s greeting, the child leapt in her womb. And Elizabeth was filled with the Holy Spirit and exclaimed with a loud cry, ‘Blessed are you among women, and blessed is the fruit of your womb. And why has this happened to me, that the mother of my Lord comes to me? For as soon as I heard the sound of your greeting, the child in my womb leapt for joy. And blessed is she who believed that there would be a fulfilment of what was spoken to her by the Lord.’

‘My soul magnifies the Lord,
and my spirit rejoices in God my Saviour,
for he has looked with favour on the lowliness of his servant.
Surely, from now on all generations will call me blessed;
for the Mighty One has done great things for me,
and holy is his name.
His mercy is for those who fear him
from generation to generation.
He has shown strength with his arm;
he has scattered the proud in the thoughts of their hearts.
He has brought down the powerful from their thrones,
and lifted up the lowly;
he has filled the hungry with good things,
and sent the rich away empty.
He has helped his servant Israel,
in remembrance of his mercy,
according to the promise he made to our ancestors,
to Abraham and to his descendants for ever.’
And Mary remained with her for about three months and            then returned to her home.

From the Angelus address of Pope Benedict in Castel Gandolfo, 15 August 2008:

Mary assumed into Heaven points out to us the final destination of our earthly pilgrimage. She reminds us that our whole being - spirit, soul and body - is destined for fullness of life; that those who live and die in love of God and of their neighbour will be transfigured in the image of the glorious Body of the Risen Christ; that the Lord will cast down the proud and exalt the humble (cf. Lk 1: 51-52). With the mystery of her Assumption Our Lady proclaims this eternally. May you be praised for ever, O Virgin Mary! Pray the Lord for us. 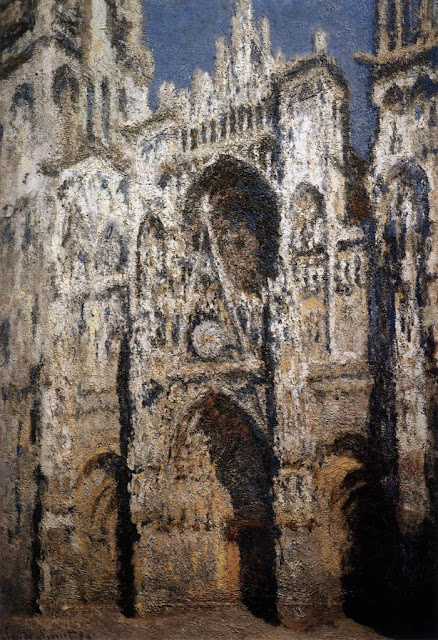 Rouen Cathedral in Full Sunlight
Claude Monet [Web Gallery of Art]
Cathedral of Our Lady of the Assumption, Rouen, France

Who is she ascends so high
Words by Sir John Beaumont (1582 - 1628)
Music by Leo Nestor who here conducts the American Repertory Singers.

This hymn is used in the Breviary for Evening Prayer on the Solemnity of the Assumption.

Who is she ascends so high,
Next the heav'nly King,
Round about whom angels fly,
And her praises sing?

Who is she adorned with light,
Makes the sun her robe,
At whose feet the queen of night
Lays her changing globe?

This is she in whose pure womb
Heaven's Prince remained;
Wherefore in no earthly tomb
Could she be contained.

Heav'n she was, which held that fire,
Whence the world took light,
And to heav'n doth now aspire:
Flames with flames t’unite.

She that did so clearly shine,
When our day begun,
See how bright her beams decline:
Now she sits with the Sun. 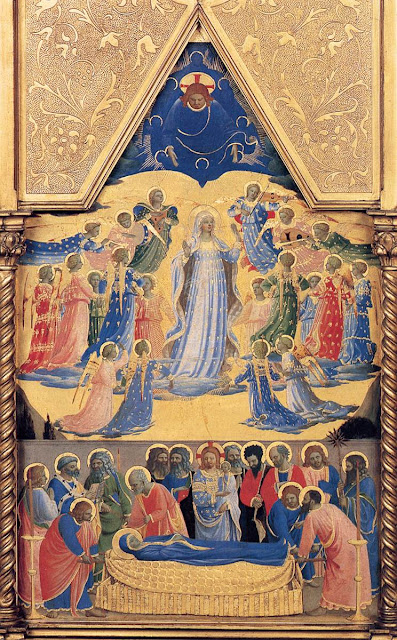 Today, the Solemnity of the Assumption, The Catholic Thing features Blessed Fra Angelico's painting above with a commentary/reflection by Brian G. Svoboda.