'So was the Word made incarnation / In Mary's womb, a son.' Sunday Reflections, 4th Sunday of Advent, Year B 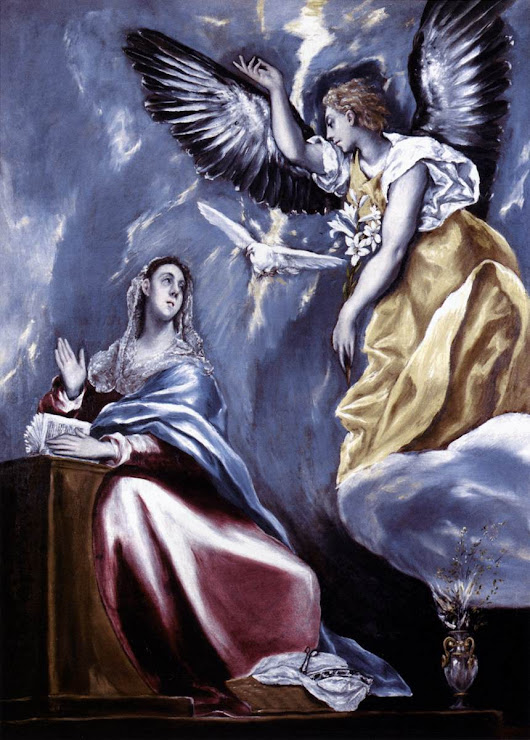 In the sixth month the angel Gabriel was sent from God to a city of Galilee named Nazareth, to a virgin betrothed to a man whose name was Joseph, of the house of David. And the virgin's name was Mary. And he came to her and said, “Greetings, O favoured one, the Lord is with you!” But she was greatly troubled at the saying, and tried to discern what sort of greeting this might be. And the angel said to her, “Do not be afraid, Mary, for you have found favour with God. And behold, you will conceive in your womb and bear a son, and you shall call his name Jesus. He will be great and will be called the Son of the Most High. And the Lord God will give to him the throne of his father David, and he will reign over the house of Jacob for ever, and of his kingdom there will be no end.”

And Mary said to the angel, “How will this be, since I am a virgin?”

And the angel answered her, “The Holy Spirit will come upon you, and the power of the Most High will overshadow you; therefore the child to be born will be called holy—the Son of God. And behold, your relative Elizabeth in her old age has also conceived a son, and this is the sixth month with her who was called barren. For nothing will be impossible with God.” And Mary said, “Behold, I am the servant of the Lord; let it be to me according to your word.” And the angel departed from her. 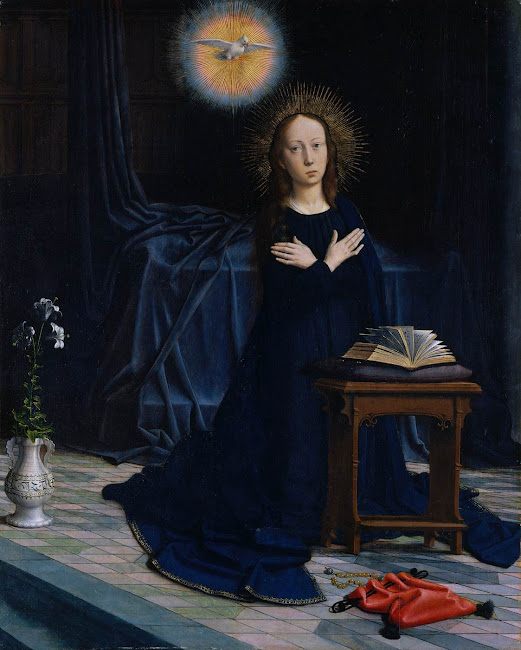 The Annunciation
Gerard David [Web Gallery of Art]
The Incarnation
by St John of the Cross
Then He summoned an archangel,
Saint Gabriel: and when he came,
Sent him forth to find a maiden,
Mary was her name.
Only through her consenting love
Could the mystery be preferred
That the Trinity in human
Flesh might clothe the Word.
Though the three Persons worked the wonder
It only happened to the One.
So was the Word made incarnation
In Mary's womb, a son.
So He who only had a Father
Now had a Mother undefiled,
Though not as ordinary maids
Had she conceived the Child.
By Mary, and with her own flesh
He was clothed in His own frame:
Both Son of God and Son of Man
Together had one name.
[Translation by Roy Campbell]
In both paintings above Mary has the word of God, the Hebrew Bible, what we Christians call the Old Testament, open in front of her. And when she says, let it be with me according to your word, she is accepting the Word. The opening words of St John's Gospel, read at the Mass During the Day on Christmas Day and read at the end of every Mass in the Extraordinary Form, tells us who the Word is: In the beginning was the Word, and the Word was with God, and the Word was God. Further on, in Verse 14, St John writes those magnificent words that are at the centre of our faith: And the Word became flesh and dwelt among us.
The Catechism of the Catholic Church quotes what St John of the Cross said about this: In giving us his Son, his only Word (for he possesses no other), he spoke everything to us at once in this sole Word - and he has no more to say. . . because what he spoke before to the prophets in parts, he has now spoken all at once by giving us the All Who is His Son. Any person questioning God or desiring some vision or revelation would be guilty not only of foolish behavior but also of offending him, by not fixing his eyes entirely upon Christ and by living with the desire for some other novelty. 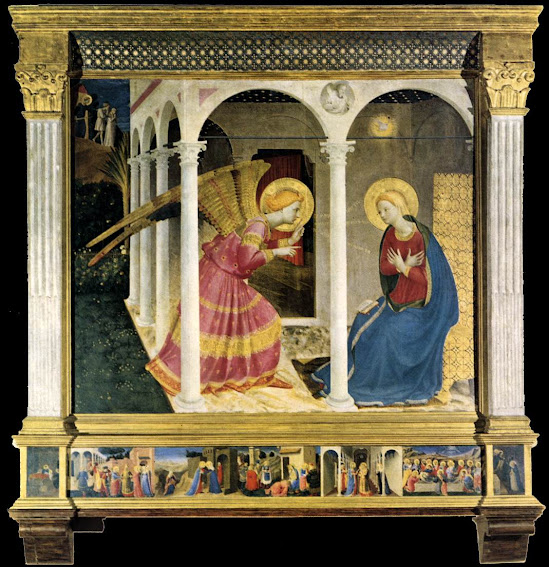 The Annunciation (1433-34)
Blessed Fra Angelico [Web Gallery of Art]
Here is part of the Angelus address of Pope Benedict XVI on 21 December 2008:

The Gospel of this Fourth Sunday of Advent proposes to us the account of the Annunciation (Lk 1: 26-38), the mystery to which we return every day in reciting the Angelus. This prayer makes us relive the decisive moment at which God knocked at Mary's heart and, having received her "yes", began to take flesh, in her and from her.

The Collect of today's Mass is the same as the one we recite at the end of the Angelus that in Italian, says: "Infondi nel nostro spirito la tua grazia, O Padre. Tu che all'annunzio dell'Angelo ci hai rivelato l'incarnazione del tuo Figlio, per la sua passione e la sua croce guidaci alla gloria della risurrezione" [Fill our hearts with your love, and as you revealed to us by an angel the coming of your Son as man, so lead us through his suffering and death to the glory of his Resurrection].

With only a few days until the Feast of Christmas, we are invited to fix our gaze on the ineffable mystery that Mary treasured for nine months in her virginal womb: the mystery of God who is made man.

This is the first foundation of the redemption. The second is the death and Resurrection of Jesus and these two inseparable aspects express a single divine plan: to save humanity and its history, assuming them fully by taking on the entire burden of all the evil that oppresses it.

The Fourth Sunday of Advent . 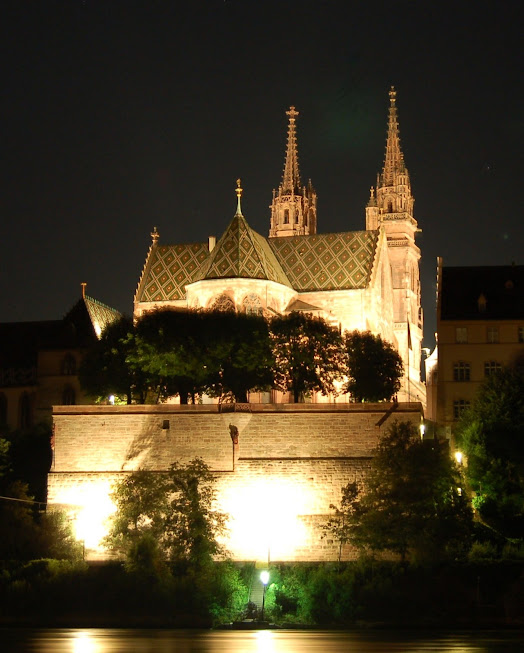